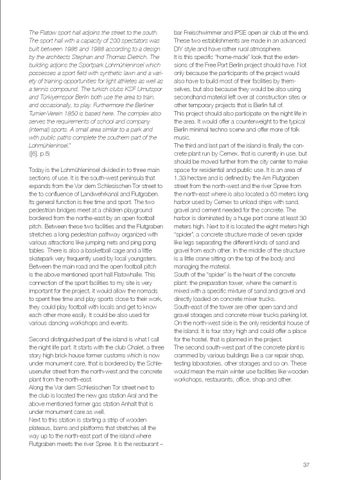 The Flatow sport hall adjoins the street to the south. The sport hall with a capacity of 200 spectators was built between 1986 and 1988 according to a design by the architects Stephan and Thomas Dietrich. The building adjoins the Sportpark Lohmühleninsel which possesses a sport field with synthetic lawn and a variety of training opportunities for light athletes as well as a tennis compound. The turkish clubs KSF Umutspor and Türkiyemspor Berlin both use the area to train, and occasionally, to play. Furthermore the Berliner Turnier-Verein 1850 is based here. The complex also serves the requirements of school and company (internal) sports. A small area similar to a park and with public paths complete the southern part of the Lohmühleninsel.” ([6], p.5) Today is the Lohmühleninsel divided in to three main sections of use. It is the south-west peninsula that expands from the Vor dem Schlesischen Tor street to the to confluence of Landwehrkanal and Flutgraben. Its general function is free time and sport. The two pedestrian bridges meet at a children playground bordered from the northe-east by an open football pitch. Between these two facilities and the Flutgraben stretches a long pedestrian pathway organized with various attractions like jumping nets and ping pong tables. There is also a basketball cage and a little skatepark very frequently used by local youngsters. Between the main road and the open football pitch is the above mentioned sport hall Flatowhalle. This connection of the sport facilities to my site is very important for the project, it would allow the nomads to spent free time and play sports close to their work, they could play football with locals and get to know each other more easily. It could be also used for various dancing workshops and events. Second distinguished part of the island is what I call the night life part. It starts with the club Chalet, a three story high brick house former customs which is now under monument care, that is bordered by the Schleusenufer street from the north-west and the concrete plant from the north-east. Along the Vor dem Schlesischen Tor street next to the club is located the new gas station Aral and the above mentioned former gas station Anhalt that is under monument care as well. Next to this station is starting a strip of wooden plateaus, barns and platforms that stretches all the way up to the north-east part of the island where Flutgraben meets the river Spree. It is the restaurant –

bar Freischwimmer and IPSE open air club at the end. These two establishments are made in an advanced DIY style and have rather rural atmosphere. It is this specific “home-made” look that the extensions of the Free Port Berlin project should have. Not only because the participants of the project would also have to build most of their facilities by themselves, but also because they would be also using secondhand material left over at construction sites or other temporary projects that is Berlin full of. This project should also participate on the night life in the area. It would offer a counterweight to the typical Berlin minimal techno scene and offer more of folk music. The third and last part of the island is finally the concrete plant run by Cemex, that is currently in use, but should be moved further from the city center to make space for residential and public use. It is an area of 1,33 hectare and is defined by the Am Flutgraben street from the north-west and the river Spree from the north-east where is also located a 60 meters long harbor used by Cemex to unload ships with sand, gravel and cement needed for the concrete. The harbor is dominated by a huge port crane at least 30 meters high. Next to it is located the eight meters high “spider”, a concrete structure made of seven spider like legs separating the different kinds of sand and gravel from each other. In the middle of the structure is a little crane sitting on the top of the body and managing the material. South of the “spider” is the heart of the concrete plant: the preparation tower, where the cement is mixed with a specific mixture of sand and gravel and directly loaded on concrete mixer trucks. South-east of the tower are other open sand and gravel storages and concrete mixer trucks parking lot. On the north-west side is the only residential house of the island. It is four story high and could offer a place for the hostel, that is planned in the project. The second south-west part of the concrete plant is crammed by various buildings like a car repair shop, testing laboratories, other storages and so on. These would mean the main winter use facilities like wooden workshops, restaurants, office, shop and other.