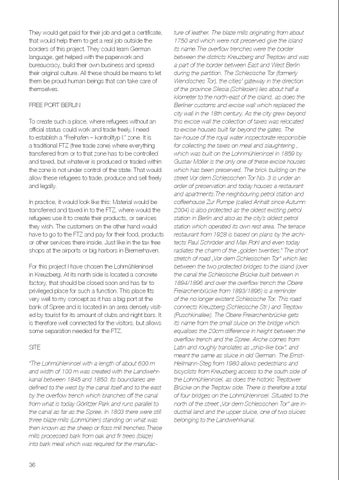 They would get paid for their job and get a certificate, that would help them to get a real job outside the borders of this project. They could learn German language, get helped with the paperwork and bureaucracy, build their own business and spread their original culture. All these should be means to let them be proud human beings that can take care of themselves. FREE PORT BERLIN To create such a place, where refugees without an official status could work and trade freely, I need to establish a “Freihafen – kontrolltyp I.” zone. It is a traditional FTZ (free trade zone) where everything transferred from or to that zone has to be controlled and taxed, but whatever is produced or traded within the zone is not under control of the state. That would allow these refugees to trade, produce and sell freely and legally. In practice, it would look like this: Material would be transferred and taxed in to the FTZ, where would the refugees use it to create their products, or services they wish. The customers on the other hand would have to go to the FTZ and pay for their food, products or other services there inside. Just like in the tax free shops at the airports or big harbors in Bremerhaven. For this project I have chosen the Lohmühleninsel in Kreuzberg. At its north side is located a concrete factory, that should be closed soon and has far to privileged place for such a function. This place fits very well to my concept as it has a big port at the bank of Spree and is located in an area densely visited by tourist for its amount of clubs and night bars. It is therefore well connected for the visitors, but allows some separation needed for the FTZ. SITE “The Lohmühleninsel with a length of about 600 m and width of 100 m was created with the Landwehrkanal between 1845 and 1850. Its boundaries are defined to the west by the canal itself and to the east by the overflow trench which branches off the canal from what is today Görlitzer Park and runs parallel to the canal as far as the Spree. In 1803 there were still three blaze mills (Lohmühlen) standing on what was then known as the sheep or floss mill trenches.These mills processed bark from oak and fir trees (blaze) into bark meal which was required for the manufac36

ture of leather. The blaze mills originating from about 1750 and which were not preserved give the island its name.The overflow trenches were the border between the districts Kreuzberg and Treptow and was a part of the border between East and West Berlin during the partition. The Schlesische Tor (formerly Wendisches Tor), the cities’ gateway in the direction of the province Silesia (Schlesien) lies about half a kilometer to the north-east of the island, as does the Berliner customs and excise wall which replaced the city wall in the 18th century. As the city grew beyond this excise wall the collection of taxes was relocated to excise houses built far beyond the gates. The tax-house of the royal water inspectorate responsible for collecting the taxes on meal and slaughtering , which was built on the Lohnmühleninsel in 1859 by Gustav Möller is the only one of these excise houses which has been preserved. The brick building on the street Vor dem Schlesischen Tor No. 3 is under an order of preservation and today houses a restaurant and apartments.The neighbouring petrol station and coffeehouse Zur Pumpe (called Anhalt since Autumn 2004) is also protected as the oldest existing petrol station in Berlin and also as the city’s oldest petrol station which operated its own rest area. The terrace restaurant from 1928 is based on plans by the architects Paul Schröder and Max Pohl and even today radiates the charm of the „golden twenties.“ The short stretch of road „Vor dem Schlesischen Tor“ which lies between the two protected bridges to the island (over the canal the Schlesische Brücke built between in 1894/1896 and over the overflow trench the Obere Freiarchenbrücke from 1893/1896) is a reminder of the no longer existent Schlesische Tor. This road connects Kreuzberg (Schlesische Str.) and Treptow (Puschkinallee). The Obere Freiarchenbrücke gets its name from the small sluice on the bridge which equalises the 20cm difference in height between the overflow trench and the Spree. Arche comes from Latin and roughly translates as „ship-like box“, and meant the same as sluice in old German. The ErnstHeilmann-Steg from 1980 allows pedestrians and bicyclists from Kreuzberg access to the south side of the Lohmühleninsel, as does the historic Treptower Brücke on the Treptow side. There is therefore a total of four bridges on the Lohmühleninsel. Situated to the north of the street „Vor dem Schlesischen Tor“ are industrial land and the upper sluice, one of two sluices belonging to the Landwehrkanal.