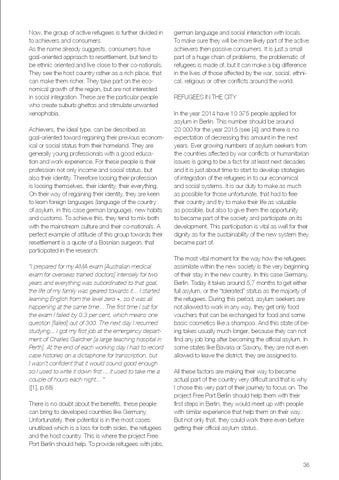 Now, the group of active refugees is further divided in to achievers and consumers. As the name already suggests, consumers have goal-oriented approach to resettlement, but tend to be ethnic oriented and live close to their co-nationals. They see the host country rather as a rich place, that can make them richer. They take part on the economical growth of the region, but are not interested in social integration. These are the particular people who create suburb ghettos and stimulate unwanted xenophobia. Achievers, the ideal type, can be described as goal-oriented toward regaining their previous economical or social status from their homeland. They are generally young professionals with a good education and work experience. For these people is their profession not only income and social status, but also their identity. Therefore loosing their profession is loosing themselves, their identity, their everything. On their way of regaining their identity, they are keen to learn foreign languages (language of the country of asylum, in this case german language), new habits and customs. To achieve this, they tend to mix both with the mainstream culture and their co-nationals. A perfect example of attitude of this group towards their resettlement is a quote of a Bosnian surgeon, that participated in the research: “I prepared for my AMA exam [Australian medical exam for overseas trained doctors] intensely for two years and everything was subordinated to that goal, the life of my family was geared towards it... I started learning English from the level zero +, so it was all happening at the same time... The first time I sat for the exam I failed by 0.3 per cent, which means one question [failed] out of 300. The next day I resumed studying... I got my first job at the emergency department of Charles Gairdner [a large teaching hospital in Perth]. At the end of each working day I had to record case histories on a dictaphone for transcription, but I wasn’t confident that it would sound good enough so I used to write it down first ... it used to take me a couple of hours each night... “ ([1], p.68) There is no doubt about the benefits, these people can bring to developed countries like Germany. Unfortunately, their potential is in the most cases unutilized which is a loss for both sides, the refugees and the host country. This is where the project Free Port Berlin should help. To provide refugees with jobs,

german language and social interaction with locals. To make sure they will be more likely part of the active achievers then passive consumers. It is just a small part of a huge chain of problems, the problematic of refugees is made of, but it can make a big difference in the lives of those affected by the war, social, ethnical, religious or other conflicts around the world. REFUGEES IN THE CITY In the year 2014 have 10 375 people applied for asylum in Berlin. This number should be around 20 000 for the year 2015 (see [4]) and there is no expectation of decreasing this amount in the next years. Ever growing numbers of asylum seekers from the countries affected by war conflicts or humanitarian issues is going to be a fact for at least next decades and it is just about time to start to develop strategies of integration of the refugees in to our economical and social systems. It is our duty to make as much as possible for those unfortunate, that had to flee their country and try to make their life as valuable as possible, but also to give them the opportunity to became part of the society and participate on its development. This participation is vital as well for their dignity as for the sustainability of the new system they became part of. The most vital moment for the way how the refugees assimilate within the new society is the very beginning of their stay in the new country. In this case Germany, Berlin. Today it takes around 5,7 months to get either full asylum, or the “tolerated” status as the majority of the refugees. During this period, asylum seekers are not allowed to work in any way, they get only food vouchers that can be exchanged for food and some basic cosmetics like a shampoo. And this state of being takes usually much longer, because they can not find any job long after becoming the official asylum. In some states like Bavaria or Saxony, they are not even allowed to leave the district, they are assigned to. All these factors are making their way to became actual part of the country very difficult and that is why I chose this very part of their journey to focus on. The project Free Port Berlin should help them with their first steps in Berlin, they would meet up with people with similar experience that help them on their way. But not only that, they could work there even before getting their official asylum status.