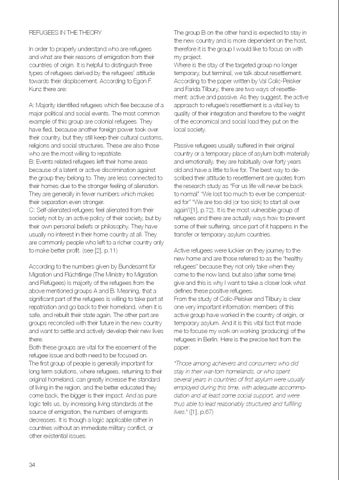 REFUGEES IN THE THEORY In order to properly understand who are refugees and what are their reasons of emigration from their countries of origin. It is helpful to distinguish three types of refugees derived by the refugees’ attitude towards their displacement. According to Egon F. Kunz there are: A: Majority identified refugees which flee because of a major political and social events. The most common example of this group are colonial refugees. They have fled, because another foreign power took over their country, but they still keep their cultural customs, religions and social structures. These are also those who are the most willing to repatriate. B: Events related refugees left their home areas because of a latent or active discrimination against the group they belong to. They are less connected to their homes due to the stronger feeling of alienation. They are generally in fewer numbers which makes their separation even stronger. C: Self-alienated refugees feel alienated from their society not by an active policy of their society, but by their own personal beliefs or philosophy. They have usually no interest in their home country at all. They are commonly people who left to a richer country only to make better profit. (see [2], p.11) According to the numbers given by Bundesamt für Migration und Flüchtlinge (The Ministry fro Migration and Refugees) is majority of the refugees from the above mentioned groups A and B. Meaning, that a significant part of the refugees is willing to take part at repatriation and go back to their homeland, when it is safe, and rebuilt their state again. The other part are groups reconciled with their future in the new country and want to settle and actively develop their new lives there. Both these groups are vital for the easement of the refugee issue and both need to be focused on. The first group of people is generally important for long term solutions, where refugees, returning to their original homeland, can greatly increase the standard of living in the region, and the better educated they come back, the bigger is their impact. And as pure logic tells us, by increasing living standards at the source of emigration, the numbers of emigrants decreases. It is though a logic applicable rather in countries without an immediate military conflict, or other existential issues.

The group B on the other hand is expected to stay in the new country and is more dependent on the host, therefore it is the group I would like to focus on with my project. Where is the stay of the targeted group no longer temporary, but terminal, we talk about resettlement. According to the paper written by Val Colic-Peisker and Farida Tilbury, there are two ways of resettlement: active and passive. As they suggest, the active approach to refugee’s resettlement is a vital key to quality of their integration and therefore to the weight of the economical and social load they put on the local society. Passive refugees usually suffered in their original country or a temporary place of asylum both materially and emotionally, they are habitually over forty years old and have a little to live for. The best way to described their attitude to resettlement are quotes from the research study as “For us life will never be back to normal” “We lost too much to ever be compensated for” “We are too old (or too sick) to start all over again”([1], p.72). It is the most vulnerable group of refugees and there are actually ways how to prevent some of their suffering, since part of it happens in the transfer or temporary asylum countries. Active refugees were luckier on they journey to the new home and are those referred to as the “healthy refugees” because they not only take when they come to the now land, but also (after some time) give and this is why I want to take a closer look what defines these positive refugees. From the study of Colic-Peisker and Tilbury is clear one very important information: members of this active group have worked in the country of origin, or temporary asylum. And it is this vital fact that made me to focuse my work on working (producing) of the refugees in Berlin. Here is the precise text from the paper: “Those among achievers and consumers who did stay in their war-torn homelands, or who spent several years in countries of first asylum were usually employed during this time, with adequate accommodation and at least some social support, and were thus able to lead reasonably structured and fulfilling lives.“ ([1], p.67)