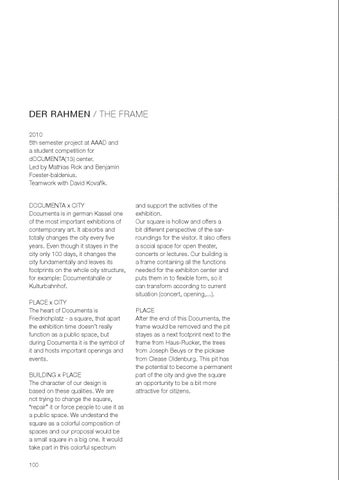 DER RAHMEN / THE FRAME 2010 5th semester project at AAAD and a student competition for dOCUMENTA(13) center. Led by Mathias Rick and Benjamin Foester-baldenius. Teamwork with David Kovařík. DOCUMENTA x CITY Documenta is in german Kassel one of the most important exhibitions of contemporary art. It absorbs and totally changes the city every five years. Even though it stayes in the city only 100 days, it changes the city fundamentally and leaves its footprints on the whole city structure, for example: Documentahalle or Kulturbahnhof. PLACE x CITY The heart of Documenta is Friedrichplatz - a square, that apart the exhibition time doesn’t really function as a public space, but during Documenta it is the symbol of it and hosts important openings and events. BUILDING x PLACE The character of our design is based on these qualities. We are not trying to change the square, “repair” it or force people to use it as a public space. We undestand the square as a colorful composition of spaces and our proposal would be a small square in a big one. It would take part in this colorful spectrum 100

and support the activities of the exhibition. Our square is hollow and offers a bit different perspective of the sarroundings for the visitor. It also offers a social space for open theater, concerts or lectures. Our building is a frame containing all the functions needed for the exhibiton center and puts them in to flexible form, so it can transform according to current situation (concert, opening,...). PLACE After the end of this Documenta, the frame would be removed and the pit stayes as a next footprint next to the frame from Haus-Rucker, the trees from Joseph Beuys or the pickaxe from Clease Oldenburg. This pit has the potential to become a permanent part of the city and give the square an opportunity to be a bit more attractive for citizens.