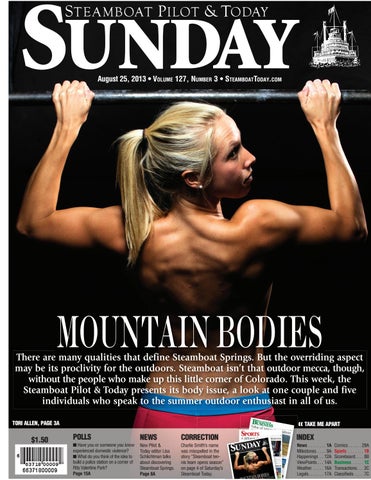 There are many qualities that define Steamboat Springs. But the overriding aspect may be its proclivity for the outdoors. Steamboat isn’t that outdoor mecca, though, without the people who make up this little corner of Colorado. This week, the Steamboat Pilot & Today presents its body issue, a look at one couple and five individuals who speak to the summer outdoor enthusiast in all of us. TORI ALLEN, PAGE 3A

■ Have you or someone you know experienced domestic violence? ■ What do you think of the idea to build a police station on a corner of Rita Valentine Park? Page 15A

BRAD PISKE Brad Piske didn’t have much of a choice. While growing up in a large family on the Gulf Coast in Texas, being on the water was a must. “I started swimming when I was 5,” Piske said. “We did all the water sports, and I started competing when I was 5.” Piske didn’t competitively swim in college, but his love for the sport never wavered. He has lived in Steamboat for 18 years and has two athletic daughters in Haley, 20, and Cara, 18. He considers himself an outdoor enthusiast, focusing on swimming, mountain and road biking, and running. In the winter, he’s an avid Nordic skier, and most mornings, he can be found skinning up Mount Werner. “I just like to do what the season has to offer,” he said. “I like to stay fit and have fun.” For now, Piske’s athletic endeavors involve the summer when he’s in the pool three or four times per week. And at 49, there is a big birthday ahead. Piske plans to celebrate the way only an athlete would think. “I might do a half Ironman,” he said.

TORI ALLEN Tori Allen is no stranger to fame, athletic competitions, the limelight or celebrity. But that’s why Steamboat fits the 25-yearold so well. The former professional rock climber and collegiate pole vaulter fits right in with an athletic community. To most in town, she’s not Tori Allen, famous rock climber — she’s a bubbly personality, always smiling and always cheerful. In a land of elite bikers, runners, hikers, kayakers and climbers, Allen fits the mold. “Moving to Steamboat has been the best decision I ever made,” she said. “This is a special community, and I feel lucky to be a part of it.” She moved to Steamboat in 2010 fresh off a career as a pole vaulter at Florida State University. Prior to her collegiate career, she was

one of the world’s foremost rock climbers. At 12, she was a professional rock climber. At 13, she held all four major domestic titles in rock climbing. In 2001, she became the youngest female to summit the nose of El Capitan in Yosemite National Park. The next year, at 14, she won the X Games. These days, Allen hikes, backpacks, plays rugby, rides her bike and, of course, climbs to stay in shape. She recently returned to competitive climbing, competing in the Psicobloc Masters Series in Park City, Utah, in late July. “Staying fit means waking up 30 minutes early for a run when I would rather sleep,” she said. “It means doing one more set of pullups when my arms are already burning. It means pushing myself above my limit because I know the pain is worth the reward of feeling strong and capable of doing anything I want.”

LYNN & ANDY PICKING Lynn Picking’s answer just rolled off her tongue. Ask what activities she, her husband, Andy, and the couple’s four children enjoy doing, and it becomes evident. “I guess all the normal Steamboat things,” she said. When it comes to activities, Steamboat is anything but normal. And the Pickings are far from your normal couple. With four children — 8-year-old Sophie, 6-year-old twins Izzy and Drew and 14-month-old Charlie — getting fit wouldn’t seem to fit into the family’s busy schedule. But the Pickings don’t just stay in shape, it’s a priority for both of them. On an early August day at the Manic Training gym, it was clear that the children follow in their parents’ footsteps. Turn around for one minute, and the four had concocted a giant obstacle course. “They have Andy’s innate ability to just go all the time,” Lynn said. But the couple makes it work. They each do Manic Training — a high-intensity, interval training workout — three times per week and find other ways to exercise whenever possible. Lynn stays at home with the four children — a workout in its own right — but said the couple makes sure to do things as a family. Teaching fitness to the children, the couple said, is a high priority. It’s up there with school and faith. “We’re fully committed to staying in shape and being healthy. It’s important to us,” Andy said. “You can teach them so much more than by telling them. You let them watch you do what you do.”

ROB PETERSON A little more than 12 years ago, Rob Peterson was hooked. It was just past 3 a.m. during his first 24-hour mountain bike race. His mind was playing a mental game of tic-tac-toe, and his body couldn’t go on any longer. “Then, all of a sudden, I snapped out of it and was wide awake and ready to ride,” he said. “I used to say I’d never ride singlespeed or never do a 24-hour race. Now, that’s all I want to do.” By the time people read this, Peterson will be competing in his fourth solo 24-hour race. Beginning at noon Saturday and finishing at noon today, Peterson competed in his third straight 24 Hours in the Sage in Gunnison.

He did his first 24-hour race 12 years ago and has done more than 35 since, sometimes as part of a team and sometimes by himself. “I love the mental part of it,” he said. “I’m not an adrenaline junkie. But my adrenaline fires over the top sometimes.” Peterson came to town some 20 years ago. He had a cousin in Steamboat, and the wild outdoors were too tempting. So Peterson came and stayed. He picked up mountain biking when he got to town and has done it ever since. Last year, he did 185 miles in Gunnison. This year, it’s 200 or bust. “The solo stuff,” he said. “I really dig it.”

DANIELLE PREISSING Danielle Preissing has a simple philosophy. Finding balance in life is partly about motivation and mostly about getting out and doing. With her husband, Tom, playing hockey professionally, including parts of six seasons in the NHL, she has sought that balance. With 4-year-old son Ellis and 2-year-old daughter Quinn, finding time to stay active isn’t always easy. But it’s imperative. “Between work and everything, we’re always juggling stuff,” Preissing said. She moved to Steamboat 10 years ago and started teaching yoga. And it’s yoga where she finds that balance. An avid runner, Preissing said yoga stretches helped her get through seven marathons. But it’s what the discipline does for her mentally that makes the biggest difference. She skis, snowboards, hikes and still runs. “Yoga is important to me,” she said. “It’s a chance for me to get out of my head and body and breath. It’s my quiet place. You can deal with the rest of life once you get an endorphin release.”

Laraine Martin’s lifestyle reads like a guide to the Steamboat Springs lifestyle. She rock climbs, she skis, she snowboards, she backpacks, she plays goalie for a hockey team and she recently picked up mountain biking. But all of those activities can be tough on the body, which led to Martin’s rediscovery of one of her first loves. Two years ago, she began dancing again, taking classes at Elevation Dance Studio and participating in Steamboat Dance Theatre. “I started dancing and forgot how fun it is,” she

said. “I’ve never been big into yoga. This lets me slow down and focus on some of the small things like my joints.” Don’t get it wrong, though. Martin is a mountain babe with a lifestyle to show for it. She’s also a project manager for the Rocky Mountain Youth Corps. Although the job entails a couple of days in the office answering emails and doing office work, Martin loves to be out in the field with a chain saw. Originally from Michigan, Martin moved to

Steamboat six years ago. While studying in Denver, she often visited Steamboat to ski. She kept coming back and finally made it her home. Steamboat provides the perfect opportunity for her to pursue her physical activities in a setting of like-minded enthusiasts. “I guess while you’re still young and able to be adventurous, you should use your body as much as you can,” she said. “The best part of Steamboat is there is always someone willing to go do something with you regardless of your ability level.”