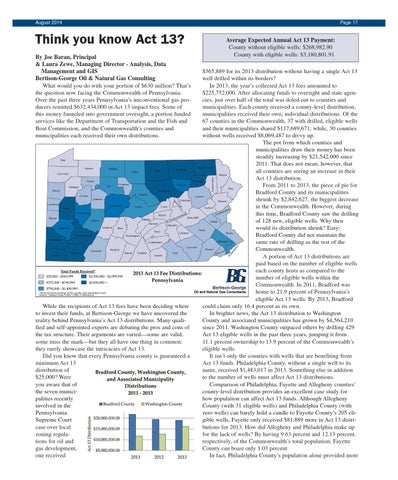 Think you know Act 13? By Joe Baran, Principal & Laura Zewe, Managing Director - Analysis, Data Management and GIS Bertison-George Oil & Natural Gas Consulting What would you do with your portion of $630 million? That’s the question now facing the Commonwealth of Pennsylvania. Over the past three years Pennsylvania’s unconventional gas producers remitted $632,434,000 in Act 13 impact fees. Some of this money funneled into government oversight, a portion funded services like the Department of Transportation and the Fish and Boat Commission, and the Commonwealth’s counties and municipalities each received their own distributions.

While the recipients of Act 13 fees have been deciding where to invest their funds, at Bertison-George we have uncovered the reality behind Pennsylvania’s Act 13 distributions. Many qualified and self-appointed experts are debating the pros and cons of the tax structure. Their arguments are varied—some are valid, some miss the mark—but they all have one thing in common: they rarely showcase the intricacies of Act 13. Did you know that every Pennsylvania county is guaranteed a minimum Act 13 distribution of $25,000? Were you aware that of the seven municipalities recently involved in the Pennsylvania Supreme Court case over local zoning regulations for oil and gas development, one received The monthly journal of the Pennsylvania Independent Oil & Gas Association

The monthly journal of the Pennsylvania Independent Oil & Gas Association