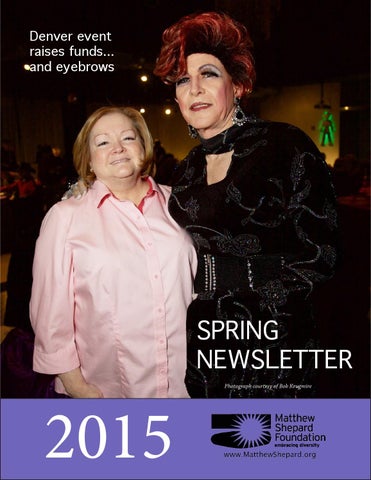 Teaching to Make a Difference: A Note from Dennis Shepard

In 2013 in a town between Sacramento and San Francisco, a team of American Canyon Middle School (ACMS) teachers, led by Ashley Baer and Sarah Knutson, proposed including the world-renowned play The Laramie Project in their 8th-grade students’ reading curriculum. Ultimately, script books of the play were purchased for a school with more than 1,000 students of various races, religions and cultures. The first classes to include the play began a year ago, covering the complete Court Statement that I read prior to Aaron McKinney’s 1999 sentencing for Matt’s murder. The teaching team wanted students to know who Matt was as a person, what he believed in, and the reasons behind his death. After that, the students began the reading of the play. The teaching team intended to raise awareness and provoke discussion about the problems of bullying and discrimination, and learning the difference between “tolerance” and “acceptance.” The students also watched the HBO movie of the play. The final assignment was to write a letter to one of the people in the book. The letters were reviewed, corrections made, and given grades. Many students wrote letters to me. The teaching team was kind enough to copy and send them to me. The letters were amazing. The students were truly able to relate to Matt in different ways. They could also relate to many of the characters in the play. The most touching part was their courage and willingness to share very personal stories with me, a complete stranger. I choke up even now thinking about some of those letters. I contacted Ashley and told her how much I appreciated and enjoyed the letters. She asked if I would be available to talk to the next class of 8th graders when they completed the book this spring. Fortunately, Judy and I were speaking at a Department of Justice hate-crimes training seminar nearby in April, and arranged to meet with the ACMS students. It was an incredible experience! Judy and I met with the students during class periods throughout the day and talked about Matt, the importance of every student being different, and standing up to discrimination and bullying. Then we opened the floor for questions. The students were attentive and very respectful. They asked thoughtful questions about Matt, about our work with the Foundation, and about our lives without Matt. Afterwards, many of them came up and thanked us for our visit. Naturally, the best part of that was the hug and the photo! I can’t wait to read the letters from these students. I also had the opportunity to speak with Ashley about the impact of teaching The Laramie Project. The ACMS is a progressive school that educators from all over the world visit. She said that visitors from conservative states such as Texas are not only shocked that the play is part of any school curriculum, but especially shocked that it’s being taught at the middle school level. She said she’s noticed changes in both the 2014 and 2015 students after reading the play, in how they conduct themselves and how they treat others. The From left: Dennis Shepard, ACMS student Haley Konoval, Judy Shepard students “get it.” They understand that actions have consequences. These changes Photos provided by Ashley Baer and Pam Phillips will carry over with them for the rest of their lives. So not only is the ACMS administration and faculty making a difference, but they have opened up the minds and hearts of students to making a difference at school, at home, and wherever they go! What more can you ask for?

On April 11, members of the Matthew Shepard Foundation traveled to the University of Wyoming in Laramie to participate in the annual Shepard Symposium on Social Justice. Their panel presentation, titled “15 Minutes of Outrage,” addressed the need for social justice movements to avoid negatively impacting progress by competing with one another for media attention. The Shepard Symposium was established in 1996 and has grown into a major national conference seeking to engage participants in discussion and analyses of strategies and actions that can eliminate social inequality. You can view the entire presentation by visiting shepardsymposium.org.

On April 3, Laramie Project Specialist Susan Burk traveled to Des Moines, Iowa to attend the 10th Annual Iowa Governor’s Conference on LGBTQ Youth. For the second year in a row, Burk engaged this truly one-of-a-kind gathering where students, teachers, state administrators, allies and community members learn and share with one another ways to better move through the world as they are and support one another. In her workshop, Burk led a discussion on how to address hate in our lives, whether it be our schools, homes or churches. After hearing Matthew’s story, participants had the opportunity to share their stories and personal experience with facing hate in their communities. Burk was overwhelmed with how inspiring this conference continues to be, and is appreciative there is a place for people of all backgrounds to get information in a non-threatening manner and not be excluded or turned away for being who they are. The conference featured excellent keynote speakers, including Jóhanna Sigurðardóttir, former Prime Minister of Iceland and the world’s first lesbian head of government, and Darren Young, LGBT advocate and WWE’s first openly gay wrestler. The conference featured workshops tackling issues as diverse as suicide prevention, LGBTQ homelessness and creating a thriving GSA.

In recognition of the recent fifth anniversary of the Matthew Shepard and James Byrd, Jr. Hate Crimes Prevention Act of 2009, the Matthew Shepard Foundation partnered with the Napa Valley College Criminal Justice Training Center and the U.S. Attorney’s Office for the Eastern District of California on April 2 to offer a hate crimes training course in Sacramento for law enforcement agencies across northern and eastern California. Judy and Dennis Shepard emphasized the importance of proper hate crimes reporting practices and the Shepard-Byrd Act. Addressing nearly 50 law enforcement personnel, the Shepards shared Matthew’s story and their perspective as the family of a hate-crime victim. Judy said it was imperative for officers to gain victims’ cooperation to counteract the ongoing trend of underreporting. “We need to make the victim comfortable, to trust us, and to trust the process,” she said. Part of the Foundation’s new initiative to strengthen hate crime reporting and enforcement includes fostering better coordination and cooperation between federal, state and local law enforcement. As Benjamin Wagner, the U.S. Attorney for the Eastern District of California said, “we’re all in this together and it all starts … with a 9-1-1 call. How effective we are depends on what you do first.” Monica Miller, Special Agent in Charge for the FBI Sacramento Field Office, urged officers to reach out to the bureau for early assistance on potential hate crime investigations. “We’re here as a resource,” she said. “Your local FBI office is here, it’s trained and we want to use every tool in the bag.” This hate crimes training course is the first of at least five planned nationwide in 2015 and acknowledges the historical significance of the Shepard-Byrd Act, the first federal law that explicitly protected the LGBT community. But the program also reflects that progress is long fought and sorely won, and often, requires painstaking steps to achieve. The Foundation is dedicated to improving every aspect of hate crimes prevention, reporting and enforcement that we can. While describing hate crimes investigative procedures, Special Agent Robert Tripp of the FBI Sacramento Field Office noted that hate crimes are the top civil rights priority for the bureau. “The reason, frankly, is [cases like] Matt,” he said. “These crimes are devastating, they’re violent, they’re egregious, they’re brutal, and they affect entire communities.” At the start of the trainings, Dennis repeated a question he hears often: “If he were here, what would Matt say about all the changes that have happened, with Don’t Ask/Don’t Tell, with DOMA, with marriage?” His usual response, Dennis said, is “he’d be scared to death. Because if he were here, it would mean these changes would not have happened. I’d have my son, but I’d have a son who was not equal.” His words remind us how long the road to equality can be, and of the sacrifices so many have faced and continue to make. But MSF’s efforts to make this law more effective also provide a chance to prevent further sacrifices in the future.

Dennis Shepard donned drag in a guest appearance as “Pearl E. Whites” to judge for ‘Denver’s Got Talent III’ in February. Organizer Anthony Aragon raised $17,000 to Erase Hate with help from sponsors Hamburger Mary’s, EXDO, Tracks, Charlie’s, The Denver Wrangler, XBar and Absolut. Thank you all!

Hi. I’m Brent Cox. In my role as Programs Director for the Foundation, I help develop and guide our outreach, education and policy reform work. Much of my time is spent on our national hate crimes reporting initiative. I joined the staff in December 2014, and I’m excited to be a part of the organization. I grew up in a small town in northern Florida and know personally the importance of erasing hatred and replacing it with acceptance and understanding. Our lives as LGBT individuals should be safe, free from threats and violence where we live, where we work and attend school. The Matthew Shepard Foundation leads the way in this effort. I’m honored to be part of it. When I’m not in the office, you can usually find me outside, enjoying nature, good weather and good adventures. This spring will actually be my first in Denver, and I’m excited to go hiking and camping with my Colorado friends. I’ve hiked the Appalachian Mountains and rafted the Chattahoochee and Apalachicola rivers, but this will be my first time really exploring the Rockies. If you have any suggestions for good trails, please feel free to drop me a note at brent@matthewshepard.org. Lastly, because you’re reading this introduction, you’re probably already a longtime supporter of the Foundation. I want to thank you for your commitment to this work. While we are based in Colorado and Wyoming, our work really happens wherever individuals such as you endeavor to make their communities safer and more welcoming for everyone. Thank you for this. I look forward to working with you in the coming years.

Since its inception, Matthew’s Place continues to evolve in the diversity of its content and audience. Bloom’s article this spring is part of our continued effort to capture the voices of our youth fighting for equality and acceptance.

Thank you to our corporate partners

Read about the Matthew Shepard Foundation's latest work across the country in their 2015 spring newsletter.