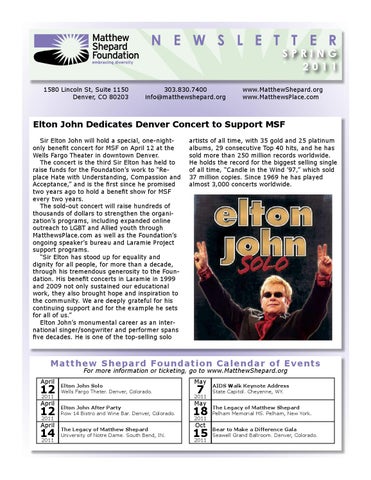 Elton John Dedicates Denver Concert to Support MSF Sir Elton John will hold a special, one-nightonly benefit concert for MSF on April 12 at the Wells Fargo Theater in downtown Denver. The concert is the third Sir Elton has held to raise funds for the Foundation’s work to “Replace Hate with Understanding, Compassion and Acceptance,” and is the first since he promised two years ago to hold a benefit show for MSF every two years. The sold-out concert will raise hundreds of thousands of dollars to strengthen the organization’s programs, including expanded online outreach to LGBT and Allied youth through MatthewsPlace.com as well as the Foundation’s ongoing speaker’s bureau and Laramie Project support programs. “Sir Elton has stood up for equality and dignity for all people, for more than a decade, through his tremendous generosity to the Foundation. His benefit concerts in Laramie in 1999 and 2009 not only sustained our educational work, they also brought hope and inspiration to the community. We are deeply grateful for his continuing support and for the example he sets for all of us.” Elton John’s monumental career as an international singer/songwriter and performer spans five decades. He is one of the top-selling solo

artists of all time, with 35 gold and 25 platinum albums, 29 consecutive Top 40 hits, and he has sold more than 250 million records worldwide. He holds the record for the biggest selling single of all time, “Candle in the Wind ’97,” which sold 37 million copies. Since 1969 he has played almost 3,000 concerts worldwide.

The Legacy of Matthew Shepard University of Notre Dame. South Bend, IN.

2nd Annual “Bear on the Road” Takes Twin Cities by Storm More than 150 Foundation supporters braved springtime snowfall to join Judy Shepard and Foundation staff for a special “Bear to Make a Difference … On the Road” event in downtown Minneapolis on March 11, raising funds and awareness and honoring the longstanding support of a legislative ally. Citing his work as an educator, congressman and LGBT ally, Judy Shepard presented U.S. Rep. Tim Walz, D-Minn., with the “Making a Difference Award” before a packed ballroom at the Graves 601 Hotel. Walz, who was elected to Congress in 2006, was a high school geography teacher and National Guard officer with a strong background in community activism. He was a co-sponsor of the Matthew Shepard and James Byrd Jr. Hate

Attendees at Bear On The Road in Minneapolis look over the auction items to benefit the Matthew Shepard Foundation.

Burk, and an informational booth manned by Foundation staff. This merging of programmatic work with a fundraising event gave the Foundation the chance to truly highlight the work we do in an engaging and interactive environment. Our thanks go out to StraightOut Media, the community of Crested Butte, and to all who attended!

Crimes Prevention Act and other important LGBT civil rights legislation during his ongoing career in Congress. Longtime MSF Board Member John Sullivan, a Minneapolis attorney with a distinguished career in nonprofit service and LGBT activism, was also honored by Mrs. Shepard with the “Essential Piece Award” in a surprise presentation recognizing his outstanding contributions to MSF in a leadership role. The event, a more intimate version of the Foundation’s signature fall “Bear to Make a Difference” Gala Dinner and Celebrity Teddy Bear Auction, netted almost $16,000 toward the organization’s work. Special thanks to Best Buy, Imation, Hamline College, the Graves Hotel, guest emcee Alexandra Winters, and the many dedicated Foundation volunteers who traveled from Denver at their own expense to make the night a success!

Wyoming’s lawmakers concluded their General Session in early March with a still-unbroken record of defeating anti-gay bills which have surfaced continually for most of the last decade. Lawmakers first dealt a procedural defeat in late February to an effort to amend the Equality State’s Constitution to prohibit recognition of same-sex marriages from other jurisdictions. Wyoming does not authorize same-sex marriage under state law, but a separate provision of the state’s legal code recognizes all marriages from other places that were valid where and when they were granted, and opponents of marriage equality have tried for years to close this provision where it would apply to samesex couples from states such as Massachusetts, or countries like the Netherlands, which allow same-sex couples to wed. A separate bill which would have changed the law to ban recognition of same-sex nuptials, without amending the Constitution, finally failed on a last-minute procedural vote on the second to the last day of the session. The Senate defeated a conference committee report on the bill by the very narrow margin of 14 in favor of the bill and 16 opposed. The Legislature does not meet again until February 2012 in a budget session where similar bills would have to win two-thirds initial support to be considered. Hundreds of LGBT and Allied Wyoming citizens mounted a historic grassroots effort to defeat the bills, with support from Wyoming Equality, the state’s LGBT activist group, and the Equality State Policy Center, a progressive lobby, among other organizations. MSF Executive Director Jason Marsden also traveled to Cheyenne twice to testify against the bill in House and Senate committees.

In February, the first-ever MatthewsPlace. com Youth Summit drew more than 100 LGBT and Allied youth, educators, media and activists for a day-long session in Denver with interactive workshops and discussions with Matthew Shepard Foundation staff, and special guest speakers. Betty DeGeneres, a proud ally to the community and mother of prominent, out talkshow star Ellen DeGeneres, shared from her years of experience as an activist for broader acceptance and understanding of lesbian, gay, bisexual and transgendered people, especially by family members. Mrs. DeGeneres recalled her daughter’s coming out experiences, both within her family and later, in the world spotlight as a public figure, as well as her own work with PFLAG, the Human Rights Campaign, and other organizations, and engaged in a lively and often humorous Q-and-A session with attendees. Participants also watched a special screening of the Southern Poverty Law Center’s LGBT-discrimination documentary “Bullied,” heard from motivational speaker Trey Malicoat, broke into groups to develop plans for simulated activism campaigns with assistance from political activist group One Colorado, and took polls and provided commentary through live blogging and text messages throughout the day. Attendees from Wyoming and Colorado also provided feedback on the event to help MSF design an even better outreach event for the future to keep youth engaged in using their voices to Erase Hate. Special thanks also to Facing History and Ourselves, which partnered with the Foundation to jointly present a separate day of workshops for educators, and to Johnson &amp; Wales University for hosting the events.

Halfway through our 2011 fiscal year, the Matthew Shepard Foundation has strengthened its advocacy work, maintained a solid financial footing, and is poised to further expand its educational outreach and resources through the rest of the year. With our small staff and national scale of operation, just keeping the day-to-day operations going smoothly is a pretty big part of what all of us on the staff do — responding to questions about bullying, hate crimes and other LGBT activism topics from supporters around the country. And we continue to support Laramie Project productions and deliver motivational speaking at schools, community centers and companies from coast to coast. But since 2009, when we expanded our board of directors to include community leaders from around the country, long-term planning has become a major part of how we use our finite time, precious donor funds and other limited resources as effectively as possible. Since that time, we’ve targeted our programs to fulfill both our original vision — to “Replace Hate with Understanding, Compassion and AcSpecial thanks to...

... for providing sponsorship dollars, volunteers and planning assistance that made “Bear on the Road” in Minneapolis a success!

ceptance,” and a refined mission statement, “To encourage respect for human dignity and differences by raising awareness, opening dialogues, and promoting positive change.” As longtime supporters may already know, we divide our programs up into three major categories: Outreach, Resources and Advocacy, the “three pillars” that hold up our vision and mission. We see this structure ensuring that our messages always include several ways that people can use their voices to make a difference. Among these pillars, our outreach work might be how we are best known. That includes identifying and interacting with — in person — those groups and populations we want to inform, influence and assist, including community groups, schools and corporations. Judy Shepard’s longstanding national speaking tour is the core of this work, but have also added several new speakers to the mix and are evaluating more as we move forward. Our resources work, meanwhile, includes deploying tools to inform, influence and assist, which we do through MatthewsPlace.com, media interviews, support for “The Laramie Project,” and collaboration with other groups. Finally, our advocacy efforts in which we take a policy position and request decision-makers and the public take action in support of LGBT equality, continues. This winter our main effort was at the Wyoming Legislature, as part of an unprecedented public outpouring of support for marriage equality. You can read more about that in this issue. We thank you for your continued support which has made this progress possible. As always, please let me know if we can provide more information about our work! I’m always available at Jason@matthewshepard.org.