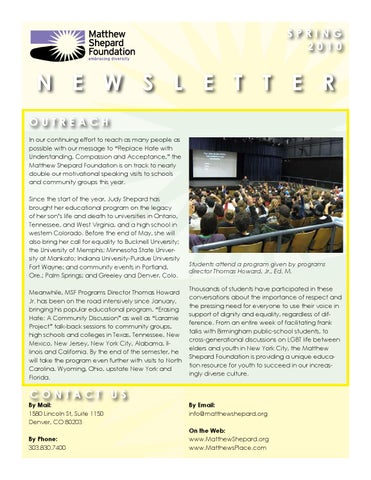 N E W S L E TT E R Ou t re a c h In our continuing effort to reach as many people as possible with our message to “Replace Hate with Understanding, Compassion and Acceptance,” the Matthew Shepard Foundation is on track to nearly double our motivational speaking visits to schools and community groups this year. Since the start of the year, Judy Shepard has brought her educational program on the legacy of her son’s life and death to universities in Ontario, Tennessee, and West Virginia, and a high school in western Colorado. Before the end of May, she will also bring her call for equality to Bucknell University; the University of Memphis; Minnesota State University at Mankato; Indiana University-Purdue University Fort Wayne; and community events in Portland, Ore.; Palm Springs; and Greeley and Denver, Colo. Meanwhile, MSF Programs Director Thomas Howard Jr. has been on the road intensively since January, bringing his popular educational program, “Erasing Hate: A Community Discussion” as well as “Laramie Project” talk-back sessions to community groups, high schools and colleges in Texas, Tennessee, New Mexico, New Jersey, New York City, Alabama, Illinois and California. By the end of the semester, he will take the program even further with visits to North Carolina, Wyoming, Ohio, upstate New York and Florida.

Students attend a program given by programs director Thomas Howard, Jr., Ed. M. Thousands of students have participated in these conversations about the importance of respect and the pressing need for everyone to use their voice in support of dignity and equality, regardless of difference. From an entire week of facilitating frank talks with Birmingham public-school students, to cross-generational discussions on LGBT life between elders and youth in New York City, the Matthew Shepard Foundation is providing a unique education resource for youth to succeed in our increasingly diverse culture.

A d v o c a c y &amp; R e s o urce s The Matthew Shepard Foundation has not rested on its laurels after successful efforts to enact the Matthew Shepard and James Byrd Jr. Hate Crimes Prevention Act back in October. Since then, MSF has provided statements of support for rallies against hate crimes in St. Louis, Mo., and Austin, Texas, and denounced the apparently bias motivated murder in Puerto Rico which shocked the nation. We have also called on our supporters to stand up for marriage equality during recent debates in several state legislatures, with Judy Shepard continually urging her audiences to re-engage with their elected officials until we are all truly equal under the law. We are also nearing completion of an exciting new set of resources for LGBT and allied young people via the youth-oriented Web site, MatthewsPlace. com, with a dozen new interviews with entertainers, media figures and other prominent supporters of equality delivering the message that no young people should feel their career options are closed off due to who they are. Later this spring, an updated Matthew’s Place will debut, offering young people the opportunity to provide their own original writing and multimedia content covering the reality of their lives as LGBT or allied residents of their own communities, and the resources to bring our interviews to life through live moderated chats.

The updated MatthewsPlace.com will provide young people with the opportunity to create their own content and interact with their peers MSF is also increasing its use of popular social media platforms such as Twitter and Facebook to keep our supporters engaged and provide another way for people to directly interact with our staff. In December and January, the Foundation was honored to receive enough Facebook users’ votes to place 18th in the nation out of more than a half-million charities in a major financial-services provider’s online grant competition, yielding new grant funding of $62,000 toward our work this year.

Events Thanks to the generosity of a Leadership Council donor from Oklahoma, MSF was able to provide the Presenting Sponsorship for 2010 Telluride Gay Ski Week in scenic southwestern Colorado from February 20th to the 27th. Paired with a public highschool speaking engagement by Judy Shepard, a banquet, and a book signing for her memoir, “The Meaning of Matthew,” the week’s events raised awareness and much-needed funds for the Foundation’s ongoing work. MSF also took its signature event, “Bear to Make a Difference,” on the road for the first time! The Foundation honored former Oregon Gov. Barbara Roberts and Portland cabaret owner Darcelle XV for their contributions to equal rights and philanthropy at a reception in Portland, Oregon on March

29th. The Foundation plans to hold similar events in communities around the country in the future in addition to our annual “main event” each October in Denver. Judy Shepard will be conducting a public speaking engagement in Palm Springs, California, on Saturday, April 17 as a benefit for the Foundation. She will remark on her son Matthew’s legacy, the last 10 years of activism in support of equality, and the road ahead in continuing to bring LGBT Americans the full legal rights they deserve. Admission to the event costs $30 and all proceeds benefit the Foundation’s work. For more information and to purchase tickets, visit http://tinyurl.com/MSFpalmsprings or e-mail andrew@matthewshepard.org.

S t i ll t o C o me In late May, the paperback edition of Judy Shepard’s popular memoir, “The Meaning of Matthew,” will be released by Penguin Books, with a book tour across the country and a new media blitz to focus public attention on the remarkable, and ongoing, effort by one family to change the nation’s attitude toward, and treatment of, gay, lesbian, bisexual and transgendered people and their loved ones.

Auction. This year’s recipient of our “Making a Difference” Award is the Right Reverend Gene Robinson, the first openly gay bishop of a major Christian denomination, who leads the Episcopal Diocese of New Hampshire. We are excited to recognize this trail-blazing figure in the struggle for equality in the faith community.

We are beginning to plan a number of small house parties for summer and fall 2010, to benefit the Foundation’s work. Thanks to generous hosts who invite friends and colleagues to learn more about the Foundation’s efforts and meet its staff, we are able to efficiently raise funds and awareness in a comfortable, intimate setting. Interested in hosting an MSF house party? Email Andrew@matthewshepard. org for more information on getting started! Finally, it’s not too early to make plans to be in Denver on October 16th for the 9th Annual Bear to Make a Difference Gala and Celebrity Teddy Bear

The paperback edition of Judy Shepard’s memoir, The Meaning of Matthew, comes out this May