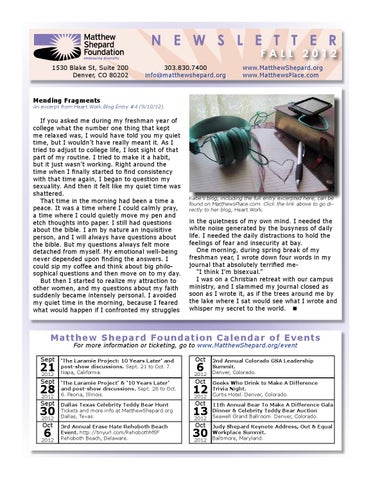 If you asked me during my freshman year of college what the number one thing that kept me relaxed was, I would have told you my quiet time, but I wouldn’t have really meant it. As I tried to adjust to college life, I lost sight of that part of my routine. I tried to make it a habit, but it just wasn’t working. Right around the time when I finally started to find consistency with that time again, I began to question my sexuality. And then it felt like my quiet time was shattered. That time in the morning had been a time a peace. It was a time where I could calmly pray, a time where I could quietly move my pen and etch thoughts into paper. I still had questions about the bible. I am by nature an inquisitive person, and I will always have questions about the bible. But my questions always felt more detached from myself. My emotional well-being never depended upon finding the answers. I could sip my coffee and think about big philosophical questions and then move on to my day. But then I started to realize my attraction to other women, and my questions about my faith suddenly became intensely personal. I avoided my quiet time in the morning, because I feared what would happen if I confronted my struggles

Katie’s blog, including the full entry excerpted here, can be found on MatthewsPlace.com. Click the link above to go directly to her blog, Heart Work.

in the quietness of my own mind. I needed the white noise generated by the busyness of daily life. I needed the daily distractions to hold the feelings of fear and insecurity at bay. One morning, during spring break of my freshman year, I wrote down four words in my journal that absolutely terrified me“I think I’m bisexual.” I was on a Christian retreat with our campus ministry, and I slammed my journal closed as soon as I wrote it, as if the trees around me by the lake where I sat would see what I wrote and whisper my secret to the world. n

Judy and Dennis Bring Message of love, understanding, and acceptance to Eastern Europe It has been a priority of the State Department under the leadership of Secretary Clinton to advocate for greater LGBT dignity and equality around the globe. Judy and Dennis have been advancing that work as they meet local LGBT leaders in Eastern Europe to help build a core group of parents and families of LGBT individuals to act as straight allies. Judy and Dennis are excited to continue the foundation’s message of “Replacing Hate with Understanding, Compassion and Acceptance” with groups of people that might never have heard Matthew’s story. By sharing their story, Judy and Dennis hope to help energize LGBT leaders in countries that are in just in the beginning of their struggle for greater equality. n

Judy and Dennis Shepard meet with Viktors Makarovs of the Latvian Foreign Ministry to talk about combating homophobia.

Judy and Dennis Shepard with US Ambasdor to Poland Lee A. Feinstein.

Judy Shepard embraces the mother of a Polish LGBT child after a program supporting straight allies.

Judy and Dennis Shepard meet with students at the Free Waldorf School in Adazi, Latvia.

Judy and Dennis Shepard deliver a keynote address to a conference on homophobia at the Sejm, the Lower House of Polish Parliament.

Foundation’s Laramie Project Specialist Joins Peoria Laramie Project Productions The Matthew Shepard Foundation’s Laramie Project Specialist will be in Peoria, Illinois for productions of the powerful plays that help keep the story of Matthew’s murder alive. Laramie Project Specialist Susan Burk will join Corn Stock Theatre for productions of The Laramie Project and The Laramie Project: Ten Years Later, facilitating post-show discussions for both plays on opening weekend of the productions. The plays were created in the aftermath of Matthew Shepard’s murder in October of 1998. Matthew, an openly gay University of Wyoming student, was beaten and left to die tied to a fence in the outskirts of Laramie, Wyoming. He died six days later. A month after the murder, the members of Tectonic Theater Project traveled to Laramie and conducted interviews with the people of the town. From these interviews they wrote the play The Laramie Project. Ten years later they returned to Laramie to explore how the town and its people had, or had not, changed since the murder. The Laramie Project: Ten Years later debuted in October of 2009. For Corn Stock Theatre’s production of the plays, Burk has been working with director Tim Wyman over the past months, providing resources and historical context, and helping arrange meetings with the “real people” who appear in the plays as Mr. Wyman traveled to Laramie for research. Wyman, who directed The Laramie Project in 2003, says it’s a great opportunity to present the plays together. He says he endured bullying as a kid and has seen his children go through the same, and that directing these plays gives him a chance to take a

stand against hate and bullying. “Matthew’s story speaks to me,” he says, “and one reason I like to do theatre is that it gives me a chance to speak out in my corner of the world.” One of the members of the cast, Chris Leasor, was in the theatre department at the University of Wyoming at the same time Matt was murdered. Leasor, now a public prosecutor, and other actors will join Wyman and other actors for cast/ audience talk back sessions after the performances. Ms. Burk will join them for the productions on September 28th and 29th as part of a series of events to bring awareness to the issues of hate and violence, and how they affect everyone in society. “I’m very excited to join this production,” says Burk. “What I’ve discovered in my work with Mr. Wyman these past months is the passion, commitment, and resolve they have for bringing these stories to life and sharing how very important it is to remember that what happened to Matthew is not just an event that happened in the past, but an example of ongoing issues that are as relevant in the world today as they were when Matt was murdered.” Wyman says he’s excited about the Foundation’s involvement in the shows. “I’m honored and humbled that someone from the Matthew Shepard Foundation would come out and give voice to the message we’re trying to get out to the community,” he says. “I think that’s a spectacular thing.” n

The Laramie Project and The Laramie Project: Ten Years Later will be performed on alternate evenings beginning September 28th, and will be presented back to back on Sunday, September 30th. Performances will also be held October 3rd-6th. For more information about performances and tickets, you can call (309) 6762196, or log onto www.cornstocktheatre.org