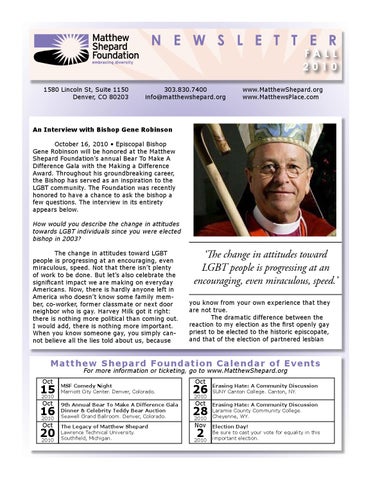 An Interview with Bishop Gene Robinson October 16, 2010 • Episcopal Bishop Gene Robinson will be honored at the Matthew Shepard Foundation’s annual Bear To Make A Difference Gala with the Making a Difference Award. Throughout his groundbreaking career, the Bishop has served as an inspiration to the LGBT community. The Foundation was recently honored to have a chance to ask the bishop a few questions. The interview in its entirety appears below. How would you describe the change in attitudes towards LGBT individuals since you were elected bishop in 2003? The change in attitudes toward LGBT people is progressing at an encouraging, even miraculous, speed. Not that there isn’t plenty of work to be done. But let’s also celebrate the significant impact we are making on everyday Americans. Now, there is hardly anyone left in America who doesn’t know some family member, co-worker, former classmate or next door neighbor who is gay. Harvey Milk got it right: there is nothing more political than coming out. I would add, there is nothing more important. When you know someone gay, you simply cannot believe all the lies told about us, because

‘The change in attitudes toward LGBT people is progressing at an encouraging, even miraculous, speed.’ you know from your own experience that they are not true. The dramatic difference between the reaction to my election as the first openly gay priest to be elected to the historic episcopate, and that of the election of partnered lesbian

Election Day! Be sure to cast your vote for equality in this important election.

Matthew Shepard Foundation Newsletter • Fall 2010 Mary Glasspool as assistant bishop in Los Angeles last December, illustrates how far we have come. While her election elicited some hand-wringing and criticism, by and large it was a non-event. At least for the Episcopal Church, the full inclusion of LGBT people is a done deal. While there remains much to be done in changing the hearts of those who still resist, officially we are an open and inclusive community – a remarkable shift in a relatively short period of time. What have been some of your most memorable experiences since your ordination? On the night before my consecration, I received a note from Judy Shepard congratulating me and telling me that she was sure that Matt would be smiling down upon me the next day. It remains one of my most cherished moments, and I have her note framed on the wall of my office, along with an icon of Matt – constant reminders of all the kids I’m doing this for. Despite all the public accolades that have come with my consecration – including being invited to give the invocation at the opening inaugural event at the Lincoln Memorial for Barack Obama’s inauguration – the most memorable and meaningful occasions continue to be the emails and messages from young people, trapped in Anywhere, USA, who are struggling to believe that God loves them in spite of their being gay, lesbian, bisexual or transgendered. Responding to each one, assuring them of God’s love for them, beyond their wildest imagining, remains my greatest honor and opportunity. In the fight for equality for all, how do you think we can best engage our straight allies, both inside and outside of the church? The great theologian Woody Allen said that most of life was just showing up. We must continue to “show up” in the lives of our straight friends and acquaintances. Show up and be who we are. Nothing changes hearts and minds about our issues and our community like knowing someone gay. And it’s something every LGBT person can do – no travel, no speeches, no extraordinary measures, just showing up as the people we are. I also think we need to be more explicit about our need for straight allies. In my studies of other civil rights movements, I have noticed that they really gained momentum when members of the “oppressor” class (whites, in the

movement for civil rights for African-Americans in the ‘60’s; men, in the movement for women’s rights in the ‘70’s; and able-bodied people, in the movement for rights for the disabled in the ‘80’s) acknowledged the price they were paying for the status quo, and joined those movements. It’s the notion that none of us is free until all of us are free. LGBT people will always be a numerical minority, and we need our straight allies to join us in the fight for our full and equal rights. We need to call our straight friends to this witness.

We seek to be embraced and celebrated as part of God’s magnificent diversity in humankind. What challenges and opportunities do you see for LGBT young people in the years to come?” On the “challenges” side, let’s remember that racism did not end with the abolition of Jim Crow laws, nor did sexism end with Title IX funding for women’s sports. Neither will prejudice against LGBT people end with the repeal of “Don’t Ask, Don’t Tell,” or even the passage of marriage equality. There will still be work to do, until sexual orientation and gender identity are non-issues. We want more than to be “tolerated.” We seek to be embraced and celebrated as part of God’s magnificent diversity in humankind. That work will take generations. On the “opportunities” side, there is virtually no limit to the opportunities that lie ahead. We are ever increasingly taking our places in government, education, the law, medicine (as I write this, I am about to speak to the Gay and Lesbian Medical Association), religion and public service. Areas of influence and leadership, once closed to us, are opening up every day. I dream of the day when no one will have to wonder whether her or his sexual orientation or gender identity will have any bearing on achieving his or her goal, public or private. It is a reality completely unimaginable when I was growing up. With the work of the Matthew Shepard Foundation and other groups, that reality will not only be imaginable – it will be the law of the land and the desire of our hearts. n

My goal in creating the pendant for the Matthew Shepard Foundation was to create a piece that will communicate our message in a diverse way that everyone can wear and in which 100% of the net proceeds go to the Foundation. This award means that 5,000 people are helping us reach our goal in spreading our message of love, tolerance and erasing hate. What future plans does Love+Pride have? Love+Pride hopes to grow as a company and to continue being a voice in the fight for equality and gay rights. And when it comes to the Matthew Shepard pendant, we set a goal of selling one million pendants. We have 995,000 to go. n

Tickets can be purchased at www.MatthewShepard.org Individual tickets: $175 Tables of 10: $1,750

Online or Off, Respect is Respect Billy Lucas was 15. He lived in Indiana. He hanged himself in his family’s barn a few weeks ago. Seth Walsh was 13. He was from California. He hanged himself, too. He was in intensive care for 10 days, but passed away. Asher Brown was also 13. He went to school in Harris, Texas. His father found him dead from a self-inflicted gunshot wound two weeks ago. Tyler Clementi was 18, from New Jersey, an accomplished violinist, and shy. He was new at Rutgers this fall. He leapt from the George Washington Bridge in the end of September. The suicide of a young person is tragic under any circumstances. But these four young people’s deaths were made more mournful by the events preceding them, and more lamentable by our failure as a society to see them as pieces of the same puzzle. All four were treated maliciously by peers before their deaths, because they were, or were perceived to be, gay. But Tyler Clementi’s death has seized particular interest because the specific disrespect and contempt he suffered were delivered online by his peers. Tyler’s roommate, prosecutors say, used a webcam to peer into what Tyler thought was the privacy of his own room, and used Twitter to tell friends that Tyler was intimately involved with a man. Compounding this cruelty, authorities say, Tyler’s roommate invited others to watch online. Tyler left a terse suicide note on Facebook and was found days later, lifeless in the Hudson River. The details of exactly what happened will

emerge as the investigation continues. What really matters, though, is not only that this promising American has chosen to end his life, as have too many others, but that this grim choice has recently been so commonplace. We live in an age increasingly defined by the instant connections technological tools offer. Amid the media attention to this tragedy, some worry that our youngest adults, growing up in a time when our networks define us more than our individuality, are losing touch with the concept of private life. But it’s too easy to blame technology, and too simplistic to suggest that a stream of ones and zeroes can subvert the basic rules of human decency. These young people lost faith in life because someone taught those who taunted them that it is OK to humiliate those who are different. Whether those bullies then carried out their torments online or in person is irrelevant to those grieving their loss. We need to know that our youth attend schools that prepare them for the future, not which allow their peers to tear them down over what makes them different, online or in the hallways. We need to make sure that the abun-

These young people lost faith in life because someone taught those who taunted them that it is OK to humiliate those who are different. dant resources available to distraught teens are accessible, and used. “Cyberbullying” is a fashionable concern today, even though some of the current cruelties strain the very definition of bullying. In truth, it is only the latest way that groups destroy what individuals strain to create, and it continues in analog form every day. We can all be connected at all times online, but it will mean nothing if our real lives are devoid of respect for each other, and especially if we fail to police both spheres. n