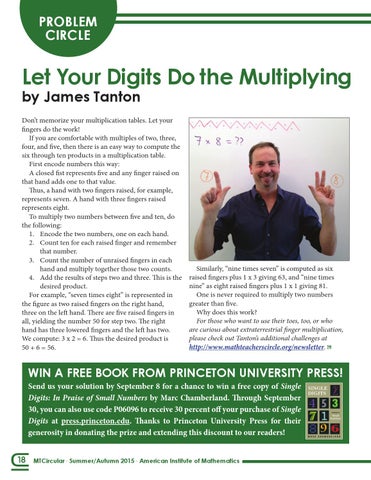 Let Your Digits Do the Multiplying by James Tanton

Don’t memorize your multiplication tables. Let your fingers do the work! If you are comfortable with multiples of two, three, four, and five, then there is an easy way to compute the six through ten products in a multiplication table. First encode numbers this way: A closed fist represents five and any finger raised on that hand adds one to that value. Thus, a hand with two fingers raised, for example, represents seven. A hand with three fingers raised represents eight. To multiply two numbers between five and ten, do the following: 1. Encode the two numbers, one on each hand. 2. Count ten for each raised finger and remember that number. 3. Count the number of unraised fingers in each hand and multiply together those two counts. 4. Add the results of steps two and three. This is the desired product. For example, “seven times eight” is represented in the figure as two raised fingers on the right hand, three on the left hand. There are five raised fingers in all, yielding the number 50 for step two. The right hand has three lowered fingers and the left has two. We compute: 3 x 2 = 6. Thus the desired product is 50 + 6 = 56.

Similarly, “nine times seven” is computed as six raised fingers plus 1 x 3 giving 63, and “nine times nine” as eight raised fingers plus 1 x 1 giving 81. One is never required to multiply two numbers greater than five. Why does this work? For those who want to use their toes, too, or who are curious about extraterrestrial finger multiplication, please check out Tanton’s additional challenges at http://www.mathteacherscircle.org/newsletter. ⊆

WIN A FREE BOOK FROM PRINCETON UNIVERSITY PRESS! Send us your solution by September 8 for a chance to win a free copy of Single Digits: In Praise of Small Numbers by Marc Chamberland. Through September 30, you can also use code P06096 to receive 30 percent off your purchase of Single Digits at press.princeton.edu. Thanks to Princeton University Press for their generosity in donating the prize and extending this discount to our readers! 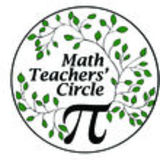