Rajeev Jhawar’s Usha Martin Establishes themselves as a Multi-Product Organisations. 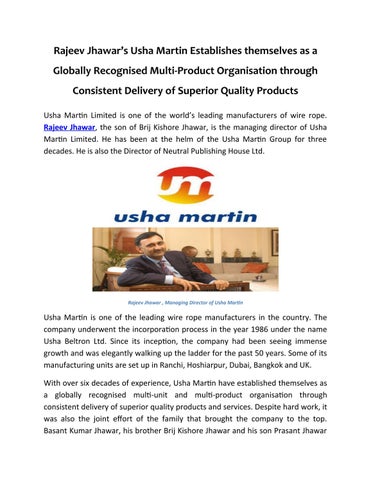 Rajeev Jhawar’s Usha Martin Establishes themselves as a Globally Recognised Multi-Product Organisation through Consistent Delivery of Superior Quality Products Usha Martin Limited is one of the world’s leading manufacturers of wire rope. Rajeev Jhawar, the son of Brij Kishore Jhawar, is the managing director of Usha Martin Limited. He has been at the helm of the Usha Martin Group for three decades. He is also the Director of Neutral Publishing House Ltd.

Usha Martin is one of the leading wire rope manufacturers in the country. The company underwent the incorporation process in the year 1986 under the name Usha Beltron Ltd. Since its inception, the company had been seeing immense growth and was elegantly walking up the ladder for the past 50 years. Some of its manufacturing units are set up in Ranchi, Hoshiarpur, Dubai, Bangkok and UK. With over six decades of experience, Usha Martin have established themselves as a globally recognised multi-unit and multi-product organisation through consistent delivery of superior quality products and services. Despite hard work, it was also the joint effort of the family that brought the company to the top. Basant Kumar Jhawar, his brother Brij Kishore Jhawar and his son Prasant Jhawar

along with the company&#39;s MD and his Nephew Rajeev Jhawar Usha Martin, took the company to great heights. While the family jointly held 51% of the stake, the rest of the retailers held only 49% of the stake. Usha Martin had a huge load of debt on its balance sheets. As of 2018, the company&#39;s debt stood at 4650 crores. The company&#39;s MD Rajeev Jhawar, along with other board members, worked towards bringing down the debt of the company. The company was planning to sell its steel business in a bid to pay off its debts. What seemed to be a notable step in the history of the company, came to an end when the Tatas were given the deal under a 5-year contract. Tata Steel through Tata Sponge, which is a subsidiary unit, was to take over the unit presiding in Jamshedpur for a cost of 4600 crores. As per the MD of Usha Martin, Rajeev Jhawar, following the sale Usha Martin will divert its major focus towards strengthening its business. The company will be working towards strengthening its rope business, as a result of which the company is hoping to secure a place among the top three wire rope players. The slowdown followed by the COVID-19 pandemic has surely affected the top line of Usha Martin. However, currently the company is preparing to ramp up its capacities and MD Rajeev Jhawar seems to be confident and optimistic about the days to come. Usha Martin is also preparing to invest in the domestic market at large. It is also expecting a decent profitability growth in the following three years.

Rajeev Jhawar’s Usha Martin Establishes themselves as a Multi-Product Organisations. 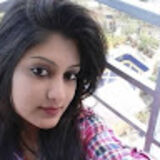