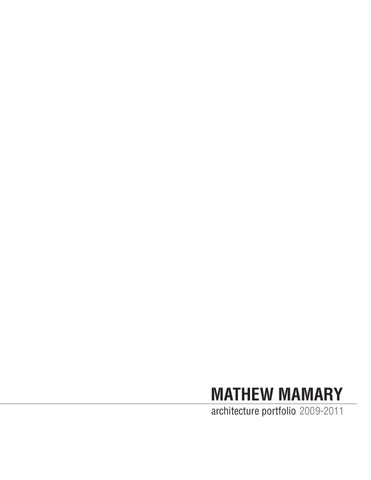 May 2009 - August 2009 / November 2009 - January 2010 World Trade Center Construction Attended meetings regarding construction and design for the World Trade Center development. Aided in the re-coordination of Mechanical, Electrical and Plumbing systems for the Transportation Hub and Towers 2 and 3. Entered and maintained RFI, CO, OME, and scope database information.

The project provides the opportunity to design a stadium which not only accommodates the fans viewing of the game, but also allows for viewing the urban context.

With a Footprint of over 14 acres, Pier 40 is one of the largest piers in New York City. Built by filling in several piers in 1963, Pier 40 was a last attempt to reinvest and retain some of New York City’s commercial cargo shipping industries on its shores.

Pier 40 is located along the waterfront on the west side of NYC. It is accessible by the west side highway as well as numerous subway lines. The pier is also located near a path/ferry station which allows easy access to and from New Jersey as well as other areas in NY.

Due to the dimensions of the pier, parking can not be located directly on the site. The surrounding areas provide numerous facilities for parking. This allows for the opportunity to leave the site open as opposed to having the stadium in a sea of parking lots. Since the stadium is located within walking distance to public transportation, parking is not as big an issue if it were located in a rural area.

Currently home to both the NY Jets and NY Giants, the Meadowlands Stadium is the only stadium to accommodate two NFL teams. It is sharred by two teams but predominantly referred to as Giants Stadium, thus creating a legitimate argument for a seperate stadium. Additionally, both teams represent NY but play in NJ.

Since 9/11, and even before, the World Trade Center has been in the minds of not only New Yorkers, but the entire country. It has become synonymous with the city of New York, and the country.

The site is filled within the parameters of the pier providing program for the stadium. A cube is then removed from the center of the stadium to allow for the field. The corners are removed to allow access around the stadium as well as giving preliminary form to the structure. The interior is recessed to create the seating around the field.

Sections are removed to create views in and out of the stadium, allowing the viewer to experience the game as well as the city. By removing the sections circulation and programmatic issues are created. The sections removed are reduced in size and placed back into the stadium. Thus allowing some programmatic elements to be replaced in the structure, as well as creating circulation from one volume to the next.

The arrows signify the line of site out of the stadium to the views of the city. The views were predetermined as significant landmarks/ sites within New York City/New Jersey. These views include the Empire State Building, World Trade Center, and Meadowlands Sports Arena. Not only are views out of the stadium achieved, views into the stadium are provided as well.

The structural frames follow the exterior form, supporting the facade as well as the seating platforms.

Beams tie into the frame and run from the facade to the seating platforms, supporting the levels.

Three columns connect to the frame and the beams to transfer the loads of the structure.

The platforms are reinforced concrete and supported by the structural steel frames throughout the stadium. The platforms rest on the beams and are broken up in certain areas to allow for the views in and out of the stadium.

The seating connects to both the structural frames as well as the reinforced concrete platforms. Like the circulation platforms, the seating platforms are cut in certain areas to allow for the views into and out of the stadium.

The facade is attached to the structural frame which supports the load of the facade. The facade is a screen which allows views and light into and out of the stadium. Facade

The structure of the stadium is comprised of 26 structural frames which support the platforms, seating, circulation paths, and facade. These frames are made up of 3 foot steal beams.

Design the WTC Transportation terminal, serving as the main transportation depot for all of Lower Manhattan. The site will directly connect to the 1-9 line, the Cortlandt Street Station (R and W) as well as Path train. It will also link pedestrians to the World Financial Center and its ferries through an underground concourse.

The site provides the unique opportunity to create a link between the hectic workdays of New York Cityâ&#x20AC;&#x2122;s Financial District to the memorial grounds of the World Trade Center site. The projects becomes more than just a programmatic structure, but signifies the relationship between the city and the WTC memorial. Design a structure which respects the WTC memorial site while accommodating the needs of a transportation terminal.

The above ground structure extends towards the Twin Tower memorial site, thus symbolizing open arms from the city to the memorial. This provides a comforting feeling for those lives lost in 9/11. Below ground holds all programmatic elements of the transportation terminal. This allows for the above ground portion to pay respect to the site.

Transportation Hub: Located between Tower 2 and Tower 3, adjacent to the memorial site.

Site of two reflecting pools which are located in the footprints of the Twin Towers.

Ground Zero is the site of six new buildings, a transportation hub, and a memorial to the twin towers.The site also includes an underground connection to the subway as well as path lines.

The Transportation Hub site serves as a connection between the downtown financial district and the Twin Tower Memorial site.

As a blank slate, the Transportation Hub site allows easy circulation through the World Trade Center site. The objective is to design a Transit Hub which serves the programatic nature as well as addresses circulation around the site.

Paths are created across the site to create the most direct route to and from different buildings within the World Trade Center site. The paths help guide the form of the structure and allow for a preliminary footprint of the transportation hub.

The footprint of the structure is raised toward the memorial site of the Twin Towers; thus, symbolizing open arms from the city to the memorial, providing a comforting feeling for those lives lost in 9/11. By placing the structure on the site, the paths are no longer accessibly through the site.

In order to allow for access through the site, the site must be manipulated. The interior portion is pushed down to create a path underneath the structure. This allows for both the paths and the structure to inhabit the site. Also by doing so, an interior plaza is formed which creates a nice outdoor space on the site.

The Transportation Hub site will directly connect to the 1-9 line, the Cortlandt Street Station (R and W) as well as the Path train (providing service to and from New Jersey.) It will also include sufficient space for retail, as well as a connection to the WTC memorial. 37 mathew mamary

Design an Art Gallery on the Virginia Tech campus in Blacksburg, Va. The building is to accommodate a Richard Serra sculpture, two painting galleries, exterior gallery space, and offices.

The site is located on the edge of the Virginia Tech campus which provides the opportunity to create a connection between the campus community and the community of Blacksburg, VA.

Design a building which provides the necessary exhibit space while creating a connection between the town and campus. As an alternative to blocking off access by designing a building on the site, a â&#x20AC;&#x153;main streetâ&#x20AC;? is created through the site/building which allows direct access from one community to the other.

Located in Blacksburg VA, the site lies between the Virginia Tech campus and the main downtown area of Blacksburg.

The program is split to allow a path, or “main street,” which creates a physical connection between the downtown portion of Blacksburg, and the campus community of Virginia Tech.

Exterior exhibit spaces are created by closing in a portion of the site. The path connecting the two communities is still present

View walking through the building towards the campus. Inside one of the painting galleries.

Walking along the interior path overlooking the courtyard. View from above the Richard Serra exhibit space. Abreviated portfolio of my undergraduate work while attending Virginia Tech.

Abreviated portfolio of my undergraduate work while attending Virginia Tech.