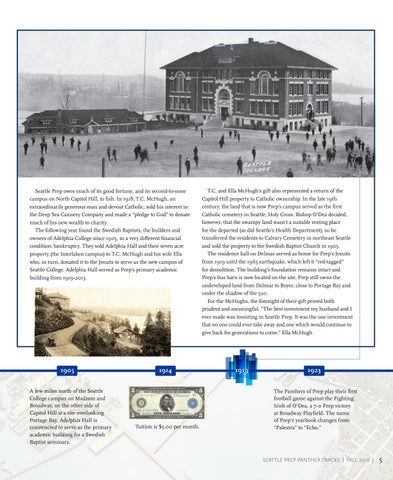 Seattle Prep owes much of its good fortune, and its second-to-none campus on North Capitol Hill, to fish. In 1918, T.C. McHugh, an extraordinarily generous man and devout Catholic, sold his interest in the Deep Sea Cannery Company and made a “pledge to God” to donate much of his new wealth to charity. The following year found the Swedish Baptists, the builders and owners of Adelphia College since 1905, in a very different financial condition: bankruptcy. They sold Adelphia Hall and their seven acre property (the Interlaken campus) to T.C. McHugh and his wife Ella who, in turn, donated it to the Jesuits to serve as the new campus of Seattle College. Adelphia Hall served as Prep’s primary academic building from 1919-2013.

1905 A few miles north of the Seattle College campus on Madison and Broadway, on the other side of Capitol Hill at a site overlooking Portage Bay, Adelphia Hall is constructed to serve as the primary academic building for a Swedish Baptist seminary.

T.C. and Ella McHugh’s gift also represented a return of the Capitol Hill property to Catholic ownership. In the late 19th century, the land that is now Prep’s campus served as the first Catholic cemetery in Seattle, Holy Cross. Bishop O’Dea decided, however, that the swampy land wasn’t a suitable resting place for the departed (as did Seattle’s Health Department), so he transferred the residents to Calvary Cemetery in northeast Seattle and sold the property to the Swedish Baptist Church in 1905. The residence hall on Delmar served as home for Prep’s Jesuits from 1919 until the 1965 earthquake, which left it “red-tagged” for demolition. The building’s foundation remains intact and Prep’s bus barn is now located on the site. Prep still owns the undeveloped land from Delmar to Boyer, close to Portage Bay and under the shadow of the 520. For the McHughs, the foresight of their gift proved both prudent and meaningful. “The best investment my husband and I ever made was investing in Seattle Prep. It was the one investment that no one could ever take away and one which would continue to give back for generations to come.” Ella McHugh

1923 The Panthers of Prep play their first football game against the Fighting Irish of O’Dea, a 7-0 Prep victory at Broadway Playfield. The name of Prep’s yearbook changes from “Palestra” to “Echo.” Magazine for friends, family and alumni of Seattle Preparatory School

Magazine for friends, family and alumni of Seattle Preparatory School