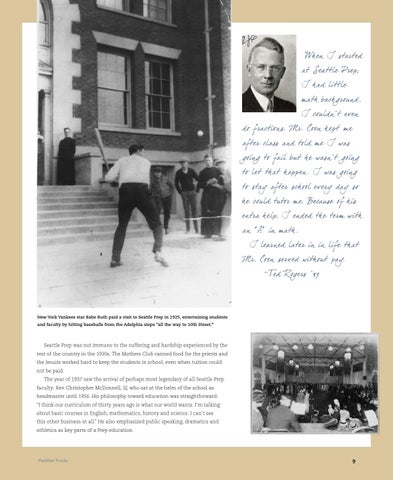 at Seattle Prep, I had little

math backgrou nd. I couldn’t even

do fractions. Mr. Coen kept m e after class and told m e I was

going to fail but h e wasn’t going to let that happen. I was going

to stay after sch ool every day so h e could tutor m e. Because of h is

I learned later in in life that

New York Yankees star Babe Ruth paid a visit to Seattle Prep in 1925, entertaining students and faculty by hitting baseballs from the Adelphia steps “all the way to 10th Street.”

Seattle Prep was not immune to the suffering and hardship experienced by the rest of the country in the 1930s. The Mothers Club canned food for the priests and the Jesuits worked hard to keep the students in school, even when tuition could not be paid. The year of 1937 saw the arrival of perhaps most legendary of all Seattle Prep faculty: Rev. Christopher McDonnell, SJ, who sat at the helm of the school as headmaster until 1956. His philosophy toward education was straightforward: “I think our curriculum of thirty years ago is what our world wants. I’m talking about basic courses in English, mathematics, history and science. I can’t see this other business at all.” He also emphasized public speaking, dramatics and athletics as key parts of a Prep education.