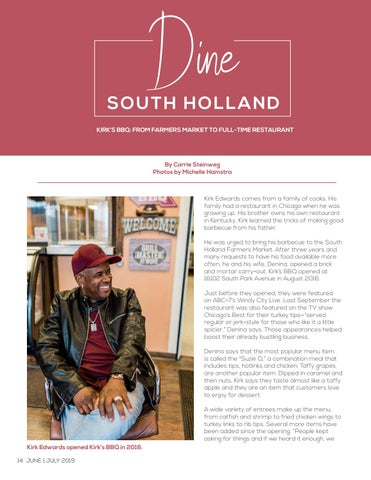 SO U TH HO L L A ND KIRK’S BBQ: FROM FARMERS MARKET TO FULL-TIME RESTAURANT

Kirk Edwards comes from a family of cooks. His family had a restaurant in Chicago when he was growing up. His brother owns his own restaurant in Kentucky. Kirk learned the tricks of making good barbecue from his father. He was urged to bring his barbecue to the South Holland Farmers Market. After three years and many requests to have his food available more often, he and his wife, Denina, opened a brick and mortar carry-out. Kirk’s BBQ opened at 16102 South Park Avenue in August 2016. Just before they opened, they were featured on ABC-7’s Windy City Live. Last September the restaurant was also featured on the TV show Chicago’s Best for their turkey tips—“served regular or jerk-style for those who like it a little spicier,” Denina says. Those appearances helped boost their already bustling business. Denina says that the most popular menu item is called the “Suzie Q,” a combination meal that includes tips, hotlinks and chicken. Taffy grapes are another popular item. Dipped in caramel and then nuts, Kirk says they taste almost like a taffy apple and they are an item that customers love to enjoy for dessert. A wide variety of entrees make up the menu, from catfish and shrimp to fried chicken wings to turkey links to rib tips. Several more items have been added since the opening. “People kept asking for things and if we heard it enough, we Kirk Edwards opened Kirk’s BBQ in 2016. 14 JUNE | JULY 2019