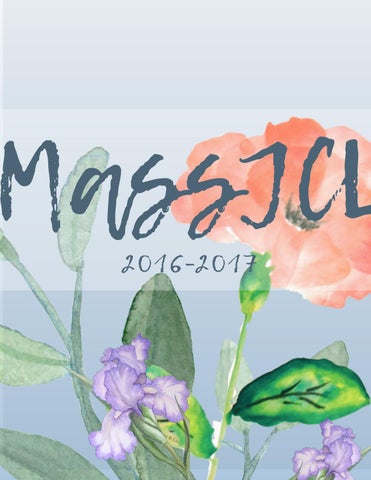 This portion of the MassJCL Digital Scrapbook is dedicated to Nationals 2016 at Indiana University, Bloomington. Enjoy!

A LETTER FROM YOUR HISTORIAN

19 College of the Holy Cross (Worcester) 21 Praetoria Pwpts. 22 Fun and Games! MassJCL Praetoria is an event dedicated to learning the ropes of JCL - our 2nd annual event was all fun and games!

MEMORIAE 14 Classics Day @ BU 16 Skits! 17 Putting in the Work(shops) When the 1st Vice President of the MassJCL is elected each year just one thing is on their mind - Classics Day. A day filled with workshops, classical skits, and s much fun!

From your Historian Dear MassJCL, It’s been a year since I was elected Massachusetts Junior Classical League Historian, and what a year it’s been. We’ve celebrated the Classics from the hills of Mount Greylock to the brick-laid towers of the College of the Holy Cross and back again - and I’m so glad I was a part of it all. Being your Historian has given me the pleasure of getting to see each and every one of you smile through the lens of my camera, being sent photographs and memorabilia from your chapter events, and creating digital publications like this. When I ran for office all those days and nights ago, I promised the MassJCL a digital scrapbook dedicated to highlighting our year, to be sent out right before state convention, and viewed throughout convention. This is that scrapbook. It’s also a testament to the incredible, wonderful things we do as an organization each year - an organization that continues to grow and flourish because of its members. As my time as an officer and a JCLer comes to a close, it’s my pleasure to give back to the MassJCL by honoring it’s people, it’s events, and it’s achievements in this scrapbook. Ave atque vale MassJCL Will Burnett MassJCL Historian ‘16-’17

The Road to Bloomington, Indiana FROM MA TO IN!

WE FINALLY MADE IT!

THANK YOU TO THE INDIANA JCL!

EVERY YEAR THE MASSJCL TAKES A GROUP PHOTO - THIS PHOTO WAS TAKEN ON “E-I-E-I-U” SPIRIT DAY!

DREW FROM BARNSTABLE DOES A CLASSICS DAY SKIT!

THANKS TO ALL THE SCHOOLS THAT ATTENDED MASSJCL PRAETORIA!

MALIKA CRUIKSHANK OF BLA IS ALL SMILES!

Ave Atque Vale To the The MASSJCL from the HS Seniors of your Executive Board... 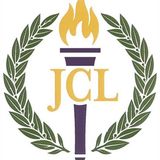