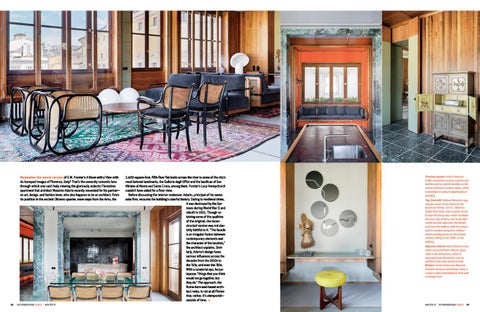 Remember the movie version of E.M. Forster’s A Room with a View with its honeyed images of Florence, Italy? That’s the swoonily romantic lens through which one can’t help viewing the gloriously eclectic Florentine apartment that architect Massimo Adario recently renovated for his partner— an art, design, and fashion lover, who also happens to be an architect. From its position in the ancient Oltrarno quarter, mere steps from the Arno, the

2,400-square-foot, fifth-floor flat looks across the river to some of the city’s most beloved landmarks, the Galleria degli Uffizi and the basilicas of San Miniato al Monte and Santa Croce, among them. Forster’s Lucy Honeychurch couldn’t have asked for a finer view. Before discussing the interior makeover, Adario, principal of his namesake firm, recounts the building’s colorful history. Dating to medieval times, it was destroyed by the Germans during World War II and rebuilt in 1951. Though retaining some of the qualities of the original, the reconstructed version was not slavishly faithful to it. “The facade is an irregular fusion between contemporary elements and the character of the location,” the architect explains. Similarly, Adario’s design fuses various influences across the decades from the 1920s to the ’60s, and even the ’80s. With a curatorial eye, he juxtaposes “things that you think would not go together, but they do.” The approach, the Rome-born-and-based architect notes, is not at all Florentine; rather, it’s atemporale— outside of time.

Previous spread: Artist Francesco Ardini created the ceramic rosettes and beetles used as cabinet handles on the master bedroom’s built-in closet, which is sheathed in walnut-edged linoleum paneling. Top, from left: Antique Moroccan rugs, vintage woven straw chairs by Jan Bocan for Thonet, Ton A.C. Alberts’s Zodiac floor lamp, and a custom settee furnish the living area, which overlooks the Arno. One of three new Verde Alpi– marble portals separates the kitchen area from the hallway with its custom built-in window banquette. Walnutdowel paneling backs an Otto Schulz cabinet, dating to the 1920s, in the hallway. Opposite bottom: Marcel Breuer Cesca chairs surround Pietro Chiesa’s glass table in the dining area, which is separated from the kitchen area by another of the new marble portals. Bottom: In the study area, Riccardo Previdi’s mirrored work hangs above a custom walnut-and-linoleum desk with a vintage stool.