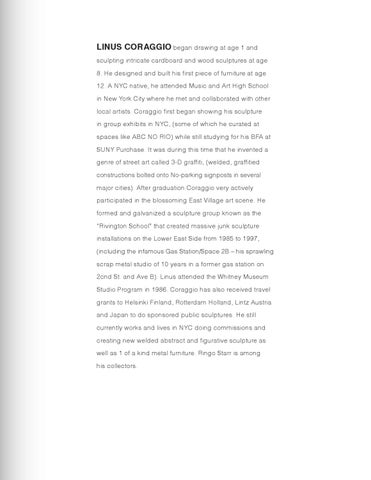 LINUS CORAGGIO began drawing at age 1 and sculpting intricate cardboard and wood sculptures at age 8. He designed and built his first piece of furniture at age 12. A NYC native, he attended Music and Art High School in New York City where he met and collaborated with other local artists. Coraggio first began showing his sculpture in group exhibits in NYC, (some of which he curated at spaces like ABC NO RIO) while still studying for his BFA at SUNY Purchase. It was during this time that he invented a genre of street art called 3-D graffiti, (welded, graffitied constructions bolted onto No-parking signposts in several major cities). After graduation Coraggio very actively participated in the blossoming East Village art scene. He formed and galvanized a sculpture group known as the “Rivington School” that created massive junk sculpture installations on the Lower East Side from 1985 to 1997, (including the infamous Gas Station/Space 2B – his sprawling scrap metal studio of 10 years in a former gas station on 2cnd St. and Ave B). Linus attended the Whitney Museum Studio Program in 1986. Coraggio has also received travel grants to Helsinki Finland, Rotterdam Holland, Lintz Austria and Japan to do sponsored public sculptures. He still currently works and lives in NYC doing commissions and creating new welded abstract and figurative sculpture as well as 1 of a kind metal furniture. Ringo Starr is among his collectors. 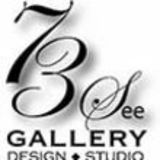