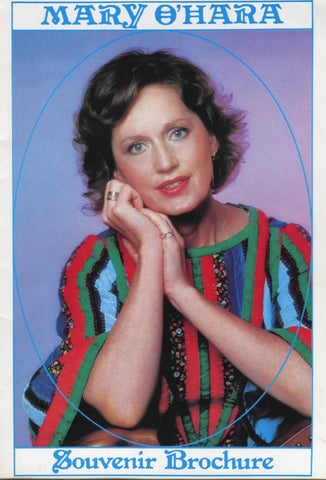 by arrangement with JO LUSTIG presents

For as long as she can remember people have been asking Mary to sing. She was 16 and still at boarding school in Dublin when she gave her first radio broadcast of Irish traditional songs, accompanying herself on the Celtic harp. Her clear soprano voice, with its haunting natural quality quickly gained her a large following in Ireland and the British Isles, and she was still under 21 by the time she had her own television series on BBC. Mary&#39;s marriage around that time to the American poet, Richard Selig, a Rhodes scholar at Oxford when they met, was short-lived. He died after fifteen months, leaving Mary to carry on her career alone. More concerts followed, and

successful tours of Australia and New Zealand. Suddenly the concerts and broadcasts stopped: her records were still sold, but there were no more live appearances. Without telling anyone Mary had become a contemplative Benedictine nun. When health problems forced her to leave the monastery, she knew that she must try singing professionally again, but was uncertain about the reception she would receive after a silence of twelve years. On 14th October 1977 Mary appeared on the &quot;Rus.sell Harty Show&quot; and in Russell&#39;s words &quot;She came quietly to her chair and stormed her way into the heads and hearts of everyone&quot;. The next day the London Weekend TV switchboard was jammed with calls and Mary was invited back the following week - something unheard of in the history of the show.

On 5th November 1977 Mary gave her &quot;comeback&quot; concert at London&#39;s Royal Festival Hall and demonstrated to the capacity crowd that she had successfully embarked upon a new career. She sang for the first time with a fivepiece backing group and her repertoire included contemporary songs as well as some of her own compositions. Each of the 25 songs was received with deafening applause - it was an extraordinary personal triumph, and at the end the audience of 3,000 people stood up and willed her back for encore after encore. Maurice Rosenbaum writing in the Telegraph said of the concert &quot;But nothing heard or seen about her could have prepared us for the impact of her first London concert on Saturday night. From the first crystalline notes of her opening item . . . to the final encore she sang with a purity of tone, a sustained precision of pitch and a

total absorption such as I have rarely heard in folk or popular music. She sang nothing, in fact, that she did not adorn, to which she did not add grace.&quot; The Melody Maker said &quot;We seem to have the re-emergence of a very special singer possessing poise, grace and a compelling vocal strength.&quot; In the past year Mary&#39;s success has been like an avalanche - The Royal Festival Hall concert was recorded and the LP rush-released in December: that album, her first new recording for many years has earned her a silver disc. The following February Mary undertook a nation-wide tour. She filled London&#39;s Royal Albert Hall and sold out two nights in Dublin - her home town. She was

also rapturously received In New York&#39;s Carnegie Hall and Toronto&#39;s Massey Hall. She has appeared on numerous TV shows, has had her own specials on iTV and BBC, and has been a repeated guest on &quot;Stars on Sunday&quot;. In July Mary took part in the &quot;Golden Gala&quot; at the London Palladium which was attended by Princess Margaret and the Prime Minister. Between engagements and tours Mary likes to spend as much time as possible in her flintstone cottage with roses around the door, in the heart of the country. She adores playing tennis and taking long walks across the fields. She frequently returns to visit the community at her old monastery, and they have been very supportive to Mary in her return to the concert platform.

The programme will be chosen from the following: -

(Cuckoo, Little Cuckoo) Dust In The Wind Ae Fond Kiss Eibhlin A Run Face To Face Forty-Five Years Greensleeves I Have A Bonnet Trimmed With Blue (Sligo Fair) I&#39;ll Have To Say I Love You In A Song I Know My Love Killing Me Softly With His Song Lord Of The Dance Maidrin Ruadh

(Dark Rosaleen) Scorn Not His Simplicity Song For A Winter&#39;s Night Spinning Wheel Streets Of London The Clown The Riddle Song The Snail The Spanish Lady Trotting To The Fair Una Bhan

MAIL ORDER If you would like further copies of this programme please forward a cheque/postal order for 90p plus a large stamped addressed envelope to: Dept. M O&#39;H, Top-Billing Publications Ltd. 11 Oxford Circus Ave., 231 Oxford St., London Wl ÂŠ Top-Billing Publications Ltd. October 1978 Please refrain from smoking in the auditorium THIS IS THE OFFICIAL TOUR BROCHURE In accordance with the requirements of the Greater London Council and the Watch Committees of the various towns and cities of the tour, the following conditions must be observed: 1. The public may leave at the end of the performance by all exit and entrance doors and such doors must at that time be open. 2. All gangways, corridors, staircases and external passageways intended for exit shall be kept entirely free from obstruction whether permanent or temporary. 3. Persons shall not be permitted to stand or sit in any of the gangways intersecting the seating, or to nit in any of the other gangways or any unseated space in the Auditorium, unless standing in such space has been specially allowed by the GLC or the Watch Committee, as applicable. If standing is permitted in the gangways at the sides and the rear of the seating it shall be limited to the numbers indicated in the notices exhibited in those positions. 4. The safety curtain must be lowered and raised once immediately before the commencement of each performance so as to ensure it being in proper working order. The Management reserve the right to change the programme without notice and arc not held responsible for the non-appearance of any artist. The Management reserve the right to refuse admittance.

If you would like to be placed on our mailing list and be informed of future Mary O&#39;Hara concerts as well as other concert news, please fill in, or copy, this coupon and return it to: Jo Lustig Ltd., PO Box 472, London, SW7 2QB. Name Address Please enclose a stamped addressed envelope. There is no other charge for this service.

You can listen to Mary every night on her new album

MaryO&#39;Hara Music Speaks Louder Than Words CHR 1194 Side One: Music Speaks Louder than Words, Annie&#39;s Song, Cucufn a Chuaichin (Cuckoo, Little Cuckoo), Oceans Avay, Oust in the Wnd, The Snail. Side Two: I&#39;ll Have to Say I Love You in a Song, Home in the Meadow, Scorn Not His Simplicity, Ceol a Phfobaire (Music of the Piper), Never My Love, Roisin Dubh (DarkRosaleen).

MaryO&#39;Hara At the Royal Festival Hall CHR 1159 Side One: Morning Has Broken, Tapestry, A Hebridean Milking Song, Among Silence, Bring Me A Shawl From Galway, Bridge Over Troubled \Afoter. Side Two: Forty-Five Years, Una Bhan (Fair Una), Scarlet Ribbons (Ruban Rouges), Song For A Wnter s Night, When I Need You, Lord Of The Dance.

Mary O'Hara concert brochure from her UK tour of Autumn 1978 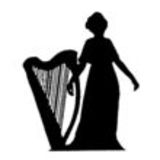