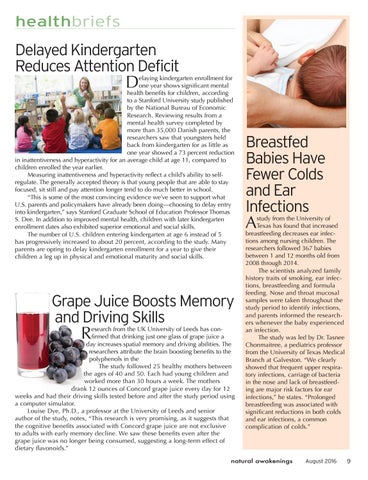 elaying kindergarten enrollment for one year shows significant mental health benefits for children, according to a Stanford University study published by the National Bureau of Economic Research. Reviewing results from a mental health survey completed by more than 35,000 Danish parents, the researchers saw that youngsters held back from kindergarten for as little as one year showed a 73 percent reduction in inattentiveness and hyperactivity for an average child at age 11, compared to children enrolled the year earlier. Measuring inattentiveness and hyperactivity reflect a child’s ability to selfregulate. The generally accepted theory is that young people that are able to stay focused, sit still and pay attention longer tend to do much better in school. “This is some of the most convincing evidence we’ve seen to support what U.S. parents and policymakers have already been doing—choosing to delay entry into kindergarten,” says Stanford Graduate School of Education Professor Thomas S. Dee. In addition to improved mental health, children with later kindergarten enrollment dates also exhibited superior emotional and social skills. The number of U.S. children entering kindergarten at age 6 instead of 5 has progressively increased to about 20 percent, according to the study. Many parents are opting to delay kindergarten enrollment for a year to give their children a leg up in physical and emotional maturity and social skills.

esearch from the UK University of Leeds has confirmed that drinking just one glass of grape juice a day increases spatial memory and driving abilities. The researchers attribute the brain boosting benefits to the polyphenols in the The study followed 25 healthy mothers between the ages of 40 and 50. Each had young children and worked more than 30 hours a week. The mothers drank 12 ounces of Concord grape juice every day for 12 weeks and had their driving skills tested before and after the study period using a computer simulator. Louise Dye, Ph.D., a professor at the University of Leeds and senior author of the study, notes, “This research is very promising, as it suggests that the cognitive benefits associated with Concord grape juice are not exclusive to adults with early memory decline. We saw these benefits even after the grape juice was no longer being consumed, suggesting a long-term effect of dietary flavonoids.”

study from the University of Texas has found that increased breastfeeding decreases ear infections among nursing children. The researchers followed 367 babies between 1 and 12 months old from 2008 through 2014. The scientists analyzed family history traits of smoking, ear infections, breastfeeding and formula feeding. Nose and throat mucosal samples were taken throughout the study period to identify infections, and parents informed the researchers whenever the baby experienced an infection. The study was led by Dr. Tasnee Chonmaitree, a pediatrics professor from the University of Texas Medical Branch at Galveston. “We clearly showed that frequent upper respiratory infections, carriage of bacteria in the nose and lack of breastfeeding are major risk factors for ear infections,” he states. “Prolonged breastfeeding was associated with significant reductions in both colds and ear infections, a common complication of colds.” 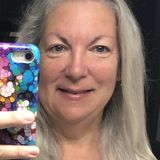