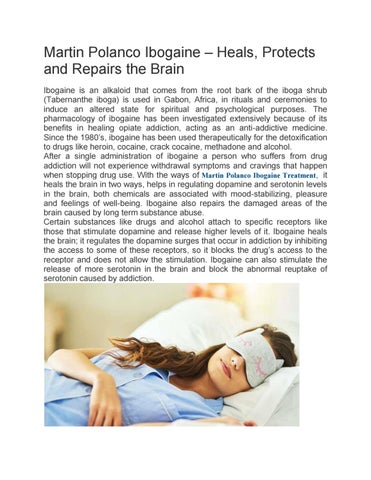 Martin Polanco Ibogaine â&#x20AC;&#x201C; Heals, Protects and Repairs the Brain Ibogaine is an alkaloid that comes from the root bark of the iboga shrub (Tabernanthe iboga) is used in Gabon, Africa, in rituals and ceremonies to induce an altered state for spiritual and psychological purposes. The pharmacology of ibogaine has been investigated extensively because of its benefits in healing opiate addiction, acting as an anti-addictive medicine. Since the 1980â&#x20AC;&#x2122;s, ibogaine has been used therapeutically for the detoxification to drugs like heroin, cocaine, crack cocaine, methadone and alcohol. After a single administration of ibogaine a person who suffers from drug addiction will not experience withdrawal symptoms and cravings that happen when stopping drug use. With the ways of Martin Polanco Ibogaine Treatment, it heals the brain in two ways, helps in regulating dopamine and serotonin levels in the brain, both chemicals are associated with mood-stabilizing, pleasure and feelings of well-being. Ibogaine also repairs the damaged areas of the brain caused by long term substance abuse. Certain substances like drugs and alcohol attach to specific receptors like those that stimulate dopamine and release higher levels of it. Ibogaine heals the brain; it regulates the dopamine surges that occur in addiction by inhibiting the access to some of these receptors, so it blocks the drugâ&#x20AC;&#x2122;s access to the receptor and does not allow the stimulation. Ibogaine can also stimulate the release of more serotonin in the brain and block the abnormal reuptake of serotonin caused by addiction.

Studies show that ibogaine is neuro-protective and stimulates increased levels of glial cell line-derived neurotrophic factor (GDNF) in the brain, stimulating the growth of new neurons and promoting plasticity in the brain. Neuroplasticity or brain plasticity is the ability of the brain to modify its connections or rewire itself. The brain has the ability to change throughout life and to recover from brain injury by reorganizing itself and forming new connections between brain cells (neurons). GDNF is a molecule involved in the formation of appropriate neuronal circuits, an essential part of the nervous system development, promoting the outgrowth and survival of different neuronal populations within the central and peripheral nervous systems. According to Dr Polanco Ibogaine releases more of these neurotrophic factors which help to repair the damaged tissues, promote regular release of â&#x20AC;&#x153;feel goodâ&#x20AC;? chemicals, and prevent the addictive responses that happen after long term use of alcohol and drugs. In this way ibogaine heals the brain by repairing the damages caused by the use of substances and protects the brain by bringing its chemistry back to balance.

Ibogaine has been mostly used to treat drug addiction though more recently it has been used to help in recovery from psychological issues like depression, anxiety, trauma, Post-traumatic Stress Disorder (PTSD) and Traumatic Brain Injury (BTI). Ibogaine works with the psychological self, it helps to resolve trauma, aggression, fear and grief by experiencing insights into your problems through visions and facilitating introspection. An ibogaine therapy helps the person to process the traumatic events and to restore the brain by rewiring the areas that have been blocked because of the trauma and abuse experienced, restoring the balance in the brain. Martin Polanco Ibogaine discuss multiple benefits of ibogaine therapy that are still being researched since it seems to help heal brain damage and restore

the nervous system to a healthy and balanced state. Drug abuse, substance dependence and mental disorders, along with other chronic illnesses damage the brain and have an impact on the nervous system; Ibogaine Treatments when conducted safely may alleviate many of the symptoms of various diseases and restore the health of those suffering from these. Martin Polanco Ibogaine Treatment is about treating symptoms of anxiety, depression and PTSD and healing the affected people. For any querie...

Martin Polanco Ibogaine Treatment is about treating symptoms of anxiety, depression and PTSD and healing the affected people. For any querie...