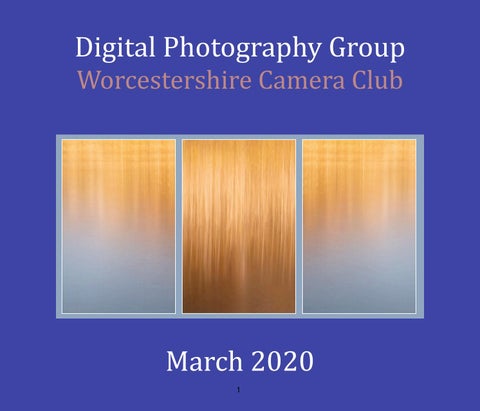 Barrie Glover 01_Culpeo, vixen This is a female Andean Fox or Culpeo. The Culpeo (Lycalopexculpaeus), is also known as Zorro Culpeo.

Barrie Glover 10_Kelp Goose - Male A male Kelp Goose (Chloephagahybrida), these are found in the Southern part of South America including Tierra del Fuego, and the Falkland Islands. 14

Barrie Glover 11_Dolphin Gull The Dolphin Gull (Leucophaeusscoresbii), is another bird native to Argentina, and the Falkland Islands.

In February, after two weeks excellent but strenuous birding in The Gambia in January carrying my Nikon kit through the day, I finally did what I had planned for a while â&#x20AC;&#x201C; I acquired a mirrorless camera for reduced weight, help with cropping for birds and animals and to improve low light photography. These are some of my images so far. The camera is Sony A7R4 with a Sony 200-600mm lens. Although I am sold on the camera for its portability, it does not yield its delights easily. As it is I am making progress but the high incidence of noise brings challenges especially for moving creatures at a distance in poor light. (I still have the Nikon kit) 16

These images were taken on a trip to Snowdonia last October. Many of them have been treated in various ways in Lightroom

Wild panel 1 - This started as a series of photographs of a broken warning sign. I put several of them into a panel and then cropped to squares. I then treated them to some work using Curves in Lightroom. 27

Circular panel Two experiments in using Curves in Lightroom, the original photographs were taken in Snowdonia 29

More playing with Curves in Lightroom

Blue Mood panel. ICM on grasses on the beach and treated using Curves 33

Lichens panel 3 Details from a slate fence in Cymorthin, Snowdonia

Wheel and Window in the Dinorwig Slate Museum 35

Multiple exposure in camera followed by Curves treatment in Lightroom 36

Water panel - 13 different photographs, all the same but different created this panel. Made in Lightroom 37

These images follow a theme that I have been pursuing for over a year now. I took a few images of trees at Link Top in Malvern. One or two of these were used as the source image. An example is shown in the first image. The problem is, I do not know which image(s) were used to produce each abstract. I think only two were used for all those sent. The images you see were produced by digital manipulation. I have to admit that each image is unique and totally non-reproducible (even if I knew the image processing I used at each stage of their production). When I start each image, its more like a computer doodle from which something sometimes emerges that strikes a chord with me. I had no idea what would appear - I suppose you could say the process is a real random walk through an abstract jungle. A recognisable reality just doesn't survive for long. 38

Rococo Gardens - Interpretations In February, accompanied by Angie Hill, Gill and I had a day out in the Rococo Gardens at Painswick. There was much to enjoy and I sought to discover subjects away from the myriad snowdrops which were the principal attraction for visitors. My selection opens with a couple of infrared pictures then, moving from interpretations of the Exhedra feature through in-camera double-exposures to reflections and trees. 50

Clive Haynes 01 Castle in the Trees

Aspects of High-Tech and Structural Expressionist Architecture This set of images was taken over two separate recent visits to London in late 2019 and early 2020. In the course of looking for architectural pictures I “discovered” Leadenhall, which was not previously an area of the City that I knew. Without getting into the technicalities (which are in any event beyond me!) I think that the predominant style of architecture can best be described as High-Tech (the “Gherkin”) and/or Structural Expressionist (the Lloyds building). Whatever, this is the money quarter and the buildings are clearly designed to impress, if not over awe. I found that my reaction to it all was a little ambivalent. Whilst I could greatly admire the vision and ability to harness new materials and techniques in order to create designs and shapes hitherto impossible; and whilst the photographer in me found the possible light and texture combinations of endless interest, the whole ambiance seemed a bit beyond the human scale and even somewhat foreboding. There is also, in modern parlance, more that an element of “Vanity Project” about the whole construct. The images are processed in high contrast, high structure black and white in an effort to sum up my reaction to the buildings and demonstrate what exactly inspired me to take the images in the first place. 62

Ever seen I moved from shooting film to digital I have always shot and processed in colour. Since being confined to mostly being at home due to the dreaded virus I thought I would grasp the nettle and reprocess my pictures taken on the Isle of Harris ( Outer Hebrides ) as black and white images. I hope you like them. 72

Sometimes I use my camera like a sketch book. Whatever takes my eye is 'caught' . No concept or deep meaning, just interesting fun of the moment! These images were taken whilst travelling on a ferry to Spain last year

Garden birds and deer, all taken in the last week or two from house windows; 'through the square window' as the kids' TV programme might say. We see the two young deer most days now, mom and dad some days, and rarely a very young deer; I hope to photograph that soon.

I thought that I would do some from a pleasant holiday in Spain last spring, so different to this year

The reason I have chosen these images is they are different to my usual wildlife shots. All taken in India, I found the people and street scenes fascinating and couldn't resist taking these shots.

A selection of images from my files

All taken with a fisheye lens.

I have attached seven images taken last week looking at buildings & structures that I have seen as Abandoned & Derelict.

These are pictures I have found when trawling back through the archive here, no real plan here, just stuff, in some cases which I have not seen for years. March 2020. A selection of work by club members now that we cannot meet in person.

March 2020. A selection of work by club members now that we cannot meet in person.