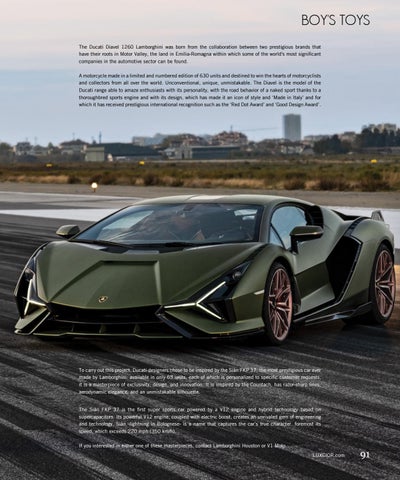 BOY'S TOYS The Ducati Diavel 1260 Lamborghini was born from the collaboration between two prestigious brands that have their roots in Motor Valley, the land in Emilia-Romagna within which some of the world's most significant companies in the automotive sector can be found. A motorcycle made in a limited and numbered edition of 630 units and destined to win the hearts of motorcyclists and collectors from all over the world. Unconventional, unique, unmistakable. The Diavel is the model of the Ducati range able to amaze enthusiasts with its personality, with the road behavior of a naked sport thanks to a thoroughbred sports engine and with its design, which has made it an icon of style and ‘Made in Italy’ and for which it has received prestigious international recognition such as the ‘Red Dot Award’ and ‘Good Design Award’.

To carry out this project, Ducati designers chose to be inspired by the Sián FKP 37, the most prestigious car ever made by Lamborghini: available in only 63 units, each of which is personalized to specific customer requests, it is a masterpiece of exclusivity, design, and innovation. It is inspired by the Countach, has razor-sharp lines, aerodynamic elegance, and an unmistakable silhouette. The Sián FKP 37 is the first super sports car powered by a V12 engine and hybrid technology based on supercapacitors. Its powerful V12 engine, coupled with electric boost, creates an unrivaled gem of engineering and technology. Sián -lightning in Bolognese- is a name that captures the car’s true character, foremost its speed, which exceeds 220 mph (350 km/h). If you interested in either one of these masterpieces, contact Lamborghini Houston or V1 Moto. LUXCIOR.com LUXCIOR.com