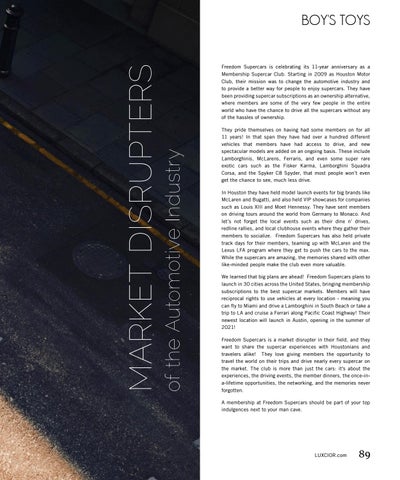 Freedom Supercars is celebrating its 11-year anniversary as a Membership Supercar Club. Starting in 2009 as Houston Motor Club, their mission was to change the automotive industry and to provide a better way for people to enjoy supercars. They have been providing supercar subscriptions as an ownership alternative, where members are some of the very few people in the entire world who have the chance to drive all the supercars without any of the hassles of ownership.

of the Automotive Industry

They pride themselves on having had some members on for all 11 years! In that span they have had over a hundred different vehicles that members have had access to drive, and new spectacular models are added on an ongoing basis. These include Lamborghinis, McLarens, Ferraris, and even some super rare exotic cars such as the Fisker Karma, Lamborghini Squadra Corsa, and the Spyker C8 Spyder, that most people won’t even get the chance to see, much less drive. In Houston they have held model launch events for big brands like McLaren and Bugatti, and also held VIP showcases for companies such as Louis XIII and Moet Hennessy. They have sent members on driving tours around the world from Germany to Monaco. And let’s not forget the local events such as their dine n’ drives, redline rallies, and local clubhouse events where they gather their members to socialize. Freedom Supercars has also held private track days for their members, teaming up with McLaren and the Lexus LFA program where they get to push the cars to the max. While the supercars are amazing, the memories shared with other like-minded people make the club even more valuable. We learned that big plans are ahead! Freedom Supercars plans to launch in 30 cities across the United States, bringing membership subscriptions to the best supercar markets. Members will have reciprocal rights to use vehicles at every location - meaning you can fly to Miami and drive a Lamborghini in South Beach or take a trip to LA and cruise a Ferrari along Pacific Coast Highway! Their newest location will launch in Austin, opening in the summer of 2021! Freedom Supercars is a market disrupter in their field, and they want to share the supercar experiences with Houstonians and travelers alike! They love giving members the opportunity to travel the world on their trips and drive nearly every supercar on the market. The club is more than just the cars: it's about the experiences, the driving events, the member dinners, the once-ina-lifetime opportunities, the networking, and the memories never forgotten. A membership at Freedom Supercars should be part of your top indulgences next to your man cave.