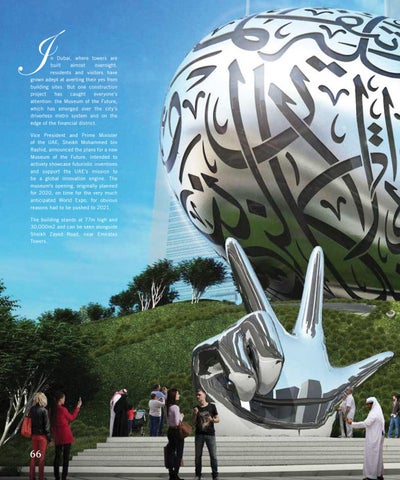 n Dubai, where towers are built almost overnight, residents and visitors have grown adept at averting their yes from building sites. But one construction project has caught everyoneâ&#x20AC;&#x2122;s attention: the Museum of the Future, which has emerged over the cityâ&#x20AC;&#x2122;s driverless metro system and on the edge of the financial district. Vice President and Prime Minister of the UAE, Sheikh Mohammed bin Rashid, announced the plans for a new Museum of the Future, intended to actively showcase futuristic inventions and support the UAEâ&#x20AC;&#x2122;s mission to be a global innovation engine. The museum's opening, originally planned for 2020, on time for the very much anticipated World Expo, for obvious reasons had to be pushed to 2021. The building stands at 77m high and 30,000m2 and can be seen alongside Sheikh Zayed Road, near Emirates Towers.