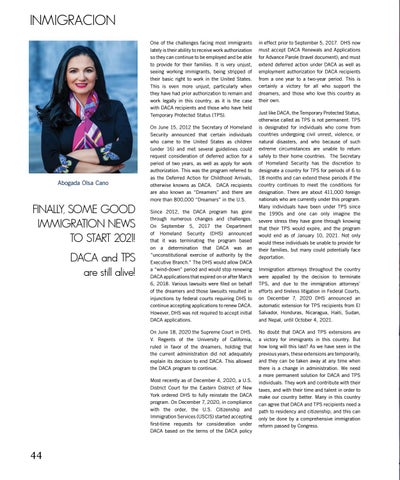 INMIGRACION One of the challenges facing most immigrants lately is their ability to receive work authorization so they can continue to be employed and be able to provide for their families. It is very unjust, seeing working immigrants, being stripped of their basic right to work in the United States. This is even more unjust, particularly when they have had prior authorization to remain and work legally in this country, as it is the case with DACA recipients and those who have held Temporary Protected Status (TPS).

FINALLY, SOME GOOD IMMIGRATION NEWS TO START 2021! DACA and TPS are still alive!

On June 15, 2012 the Secretary of Homeland Security announced that certain individuals who came to the United States as children (under 16) and met several guidelines could request consideration of deferred action for a period of two years, as well as apply for work authorization. This was the program referred to as the Deferred Action for Childhood Arrivals, otherwise knowns as DACA. DACA recipients are also known as “Dreamers” and there are more than 800,000 “Dreamers” in the U.S. Since 2012, the DACA program has gone through numerous changes and challenges. On September 5, 2017 the Department of Homeland Security (DHS) announced that it was terminating the program based on a determination that DACA was an “unconstitutional exercise of authority by the Executive Branch.” The DHS would allow DACA a “wind-down” period and would stop renewing DACA applications that expired on or after March 6, 2018. Various lawsuits were filed on behalf of the dreamers and those lawsuits resulted in injunctions by federal courts requiring DHS to continue accepting applications to renew DACA. However, DHS was not required to accept initial DACA applications. On June 18, 2020 the Supreme Court in DHS. V. Regents of the University of California, ruled in favor of the dreamers, holding that the current administration did not adequately explain its decision to end DACA. This allowed the DACA program to continue. Most recently as of December 4, 2020, a U.S. District Court for the Eastern District of New York ordered DHS to fully reinstate the DACA program. On December 7, 2020, in compliance with the order, the U.S. Citizenship and Immigration Services (USCIS) started accepting first-time requests for consideration under DACA based on the terms of the DACA policy

in effect prior to September 5, 2017. DHS now must accept DACA Renewals and Applications for Advance Parole (travel document); and must extend deferred action under DACA as well as employment authorization for DACA recipients from a one year to a two-year period. This is certainly a victory for all who support the dreamers, and those who love this country as their own. Just like DACA, the Temporary Protected Status, otherwise called as TPS is not permanent. TPS is designated for individuals who come from countries undergoing civil unrest, violence, or natural disasters, and who because of such extreme circumstances are unable to return safely to their home countries. The Secretary of Homeland Security has the discretion to designate a country for TPS for periods of 6 to 18 months and can extend these periods if the country continues to meet the conditions for designation. There are about 411,000 foreign nationals who are currently under this program. Many individuals have been under TPS since the 1990s and one can only imagine the severe stress they have gone through knowing that their TPS would expire, and the program would end as of January 10, 2021. Not only would these individuals be unable to provide for their families, but many could potentially face deportation. Immigration attorneys throughout the country were appalled by the decision to terminate TPS, and due to the immigration attorneys’ efforts and tireless litigation in Federal Courts, on December 7, 2020 DHS announced an automatic extension for TPS recipients from El Salvador, Honduras, Nicaragua, Haiti, Sudan, and Nepal, until October 4, 2021. No doubt that DACA and TPS extensions are a victory for immigrants in this country. But how long will this last? As we have seen in the previous years, these extensions are temporarily, and they can be taken away at any time when there is a change in administration. We need a more permanent solution for DACA and TPS individuals. They work and contribute with their taxes, and with their time and talent in order to make our country better. Many in this country can agree that DACA and TPS recipients need a path to residency and citizenship, and this can only be done by a comprehensive immigration reform passed by Congress.