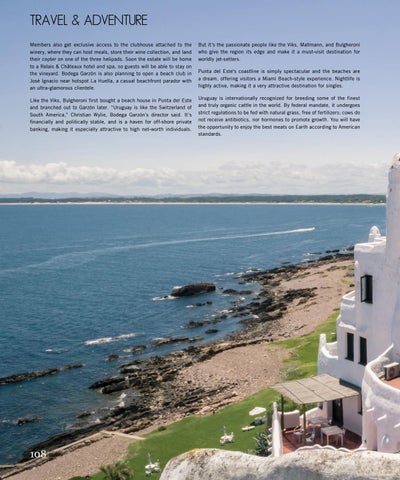 TRAVEL & ADVENTURE Members also get exclusive access to the clubhouse attached to the winery, where they can host meals, store their wine collection, and land their copter on one of the three helipads. Soon the estate will be home to a Relais & Châteaux hotel and spa, so guests will be able to stay on the vineyard. Bodega Garzón is also planning to open a beach club in José Ignacio near hotspot La Huella, a casual beachfront parador with an ultra-glamorous clientele.

But it’s the passionate people like the Viks, Mallmann, and Bulgheroni who give the region its edge and make it a must-visit destination for worldly jet-setters.

Like the Viks, Bulgheroni first bought a beach house in Punta del Este and branched out to Garzón later. “Uruguay is like the Switzerland of South America,” Christian Wylie, Bodega Garzón’s director said. It’s financially and politically stable, and is a haven for off-shore private banking, making it especially attractive to high net-worth individuals.

Uruguay is internationally recognized for breeding some of the finest and truly organic cattle in the world. By federal mandate, it undergoes strict regulations to be fed with natural grass, free of fertilizers; cows do not receive antibiotics, nor hormones to promote growth. You will have the opportunity to enjoy the best meats on Earth according to American standards.

Punta del Este's coastline is simply spectacular and the beaches are a dream, offering visitors a Miami Beach-style experience. Nightlife is highly active, making it a very attractive destination for singles.