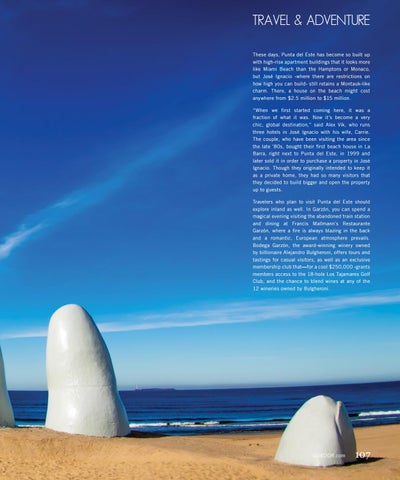 TRAVEL & ADVENTURE These days, Punta del Este has become so built up with high-rise apartment buildings that it looks more like Miami Beach than the Hamptons or Monaco, but José Ignacio -where there are restrictions on how high you can build- still retains a Montauk-like charm. There, a house on the beach might cost anywhere from $2.5 million to $15 million. “When we first started coming here, it was a fraction of what it was. Now it’s become a very chic, global destination,” said Alex Vik, who runs three hotels in José Ignacio with his wife, Carrie. The couple, who have been visiting the area since the late ‘80s, bought their first beach house in La Barra, right next to Punta del Este, in 1999 and later sold it in order to purchase a property in José Ignacio. Though they originally intended to keep it as a private home, they had so many visitors that they decided to build bigger and open the property up to guests. Travelers who plan to visit Punta del Este should explore inland as well. In Garzón, you can spend a magical evening visiting the abandoned train station and dining at Francis Mallmann’s Restaurante Garzón, where a fire is always blazing in the back and a romantic, European atmosphere prevails. Bodega Garzón, the award-winning winery owned by billionaire Alejandro Bulgheroni, offers tours and tastings for casual visitors, as well as an exclusive membership club that—for a cool $250,000 -grants members access to the 18-hole Los Tajamares Golf Club, and the chance to blend wines at any of the 12 wineries owned by Bulgheroni.