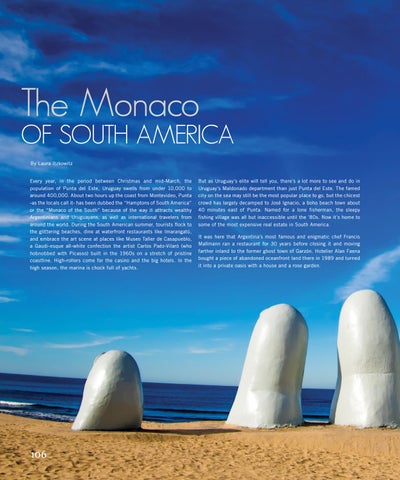 OF SOUTH AMERICA By Laura Itzkowitz Every year, in the period between Christmas and mid-March, the population of Punta del Este, Uruguay swells from under 10,000 to around 400,000. About two hours up the coast from Montevideo, Punta -as the locals call it- has been dubbed the “Hamptons of South America” or the “Monaco of the South” because of the way it attracts wealthy Argentinians and Uruguayans, as well as international travelers from around the world. During the South American summer, tourists flock to the glittering beaches, dine at waterfront restaurants like Imarangatú, and embrace the art scene at places like Museo Taller de Casapueblo, a Gaudi-esque all-white confection the artist Carlos Paéz-Vilaró (who hobnobbed with Picasso) built in the 1960s on a stretch of pristine coastline. High-rollers come for the casino and the big hotels. In the high season, the marina is chock full of yachts.

But as Uruguay’s elite will tell you, there’s a lot more to see and do in Uruguay’s Maldonado department than just Punta del Este. The famed city on the sea may still be the most popular place to go, but the chicest crowd has largely decamped to José Ignacio, a boho beach town about 40 minutes east of Punta. Named for a lone fisherman, the sleepy fishing village was all but inaccessible until the ‘80s. Now it’s home to some of the most expensive real estate in South America. It was here that Argentina’s most famous and enigmatic chef Francis Mallmann ran a restaurant for 30 years before closing it and moving farther inland to the former ghost town of Garzón. Hotelier Alan Faena bought a piece of abandoned oceanfront land there in 1989 and turned it into a private oasis with a house and a rose garden.