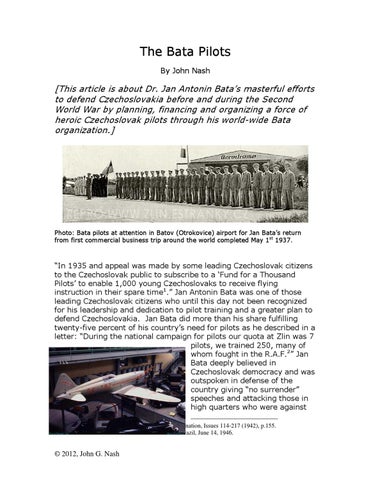 The Bata Pilots By John Nash

[This article is about Dr. Jan Antonin Bata’s masterful efforts to defend Czechoslovakia before and during the Second World War by planning, financing and organizing a force of heroic Czechoslovak pilots through his world-wide Bata organization.]

“In 1935 and appeal was made by some leading Czechoslovak citizens to the Czechoslovak public to subscribe to a ‘Fund for a Thousand Pilots’ to enable 1,000 young Czechoslovaks to receive flying instruction in their spare time1.” Jan Antonin Bata was one of those leading Czechoslovak citizens who until this day not been recognized for his leadership and dedication to pilot training and a greater plan to defend Czechoslovakia. Jan Bata did more than his share fulfilling twenty-five percent of his country’s need for pilots as he described in a letter: “During the national campaign for pilots our quota at Zlin was 7 pilots, we trained 250, many of whom fought in the R.A.F.2” Jan Bata deeply believed in Czechoslovak democracy and was outspoken in defense of the country giving “no surrender” speeches and attacking those in high quarters who were against 1 2

recovering territory lost through the Munich Agreement.3 In 1933 Jan Bata opened his first workshop for aircraft design at the Zlin boarding school for shoemakers. Bata’s initial idea was to produce gliders and to do this assembled an experienced team of designers including: Jan Kryspin, Jan Dohnalek, and Oldrich Majer to produce a series of Zlin or “Z” gliders. Due to regulatory obstacles, Bata initially produced gliders, using them as a springboard to powered aircraft. By late 1934, Bata had founded a new joint-stock company called he called Zlinska Letecka Akciova Spolecnost (ZLAS). ZLAS initially manufactured gliders, but soon began designing its first powered aircraft. To succeed with his aim of powered flight; he hired Jaroslav Lonek4 to design a small, single-seated aircraft powered by a mere10-hp engine. This new design was to be marketed as a powered sport aircraft; Lonek took up the challenge and designed the Zlin XII, Bata’s first powered aircraft. Next, Bata turned his efforts in the direction of building a faster sport plane to win competitions and publicize his new aircraft manufacturing company. Lonek again took up the challenge, and designed the Zlin XIII (Z-XIII), a low-wing, single engine aircraft with a streamlined undercarriage and a range of 425 miles. The Z-XIII prototype was first test-flown by pilot J. Svab in the spring of 1937. It reached a maximum speed of 217 mph had a cruising speed of 173 mph, which was faster than the typical sport-plane of the time. The Z-XIII represented the technical culmination of the Bata design bureau’s capability and was a plane that was clearly designed for the experienced pilot. Bata received an invitation from the Circuit de l'Est 3

Documents on British foreign policy records, August 17, 1938, "the words of Dr. Jan A. Bata, a leading Czech industrialist, who had attacked the weakness and indecision shown in high quarters towards irredentists. An irredentist is a person who advocates the recovery of territory culturally or historically related to one's nation but now subject to a foreign government. September 1, 1938 Documents on British foreign policy records; Benes comments regarding visit from Jan Bata, "he [Jan Bata] has been making lately 'no surrender' speeches. 4

Yaroslav Lonek escaped to Poland shortly after the invasion, but soon returned to the Czech Republic as an organizer of the anti-Nazi resistance. Soon Lonek’s activities were noticed and the Gestapo imprisoned him. On January 26, 1945, Yaroslav Lonek was executed in Dresden, Germany. Posthumously recognized for his heroism, Yaroslav Lonek was awarded the Czechoslovak War Cross.

race in Paris, for which he engaged Czechoslovak test pilot Major Jan Ambruz5 to pilot the new prototype. Unfortunately, bad weather delayed Major Ambruz’s departure from Prague; he arrived late in Paris and was not allowed to participate in the competition. Though, later, Major Ambruz did receive permission to bring his plane to the Buc airfield in France, and was able to demonstrate the Z-XIII's acrobatic capabilities. It is clear today that J.A. Bata intended to produce the Zlin XIII aircraft for the many hundreds of pilots he was training for the defense of Czechoslovakia. Bata offered the Zlin XIII to the Czechoslovak Army historically late and a time when the Munich Agreement had been signed (Sept. 30th, 1938) ending any hope of putting Bata’s light Czechoslovak fighter into large-scale production. Shortly after the occupation, the Germans forces occupied the Bata airport in Batov. The Germans wanted to get their hands on the Zlin XIII prototype. Bata pilot Alois Siska (later RAF Pilot for the 311th Squadron) had been instructed to fly the Zlin XIII protoype to Zagreb Yugoslavia to safety. After Siska's accomplice had been arrested by the Germans, he aborted his plan to steal the Zlin XIII, and fled to Slovakia. The Bata people in Batov, then successfully hid the Zlin XIII as a delelict aircraft for the duration of the war. Today, the Zlin XIII prototype on exhibition at the National Museum of Technology in Prague. Photo to the right: Bata’s air destinations

To give the readers some perspective, Jan Bata foresaw the value of aircraft and pilots for defending Czechoslovakia. And, already by the mid-1930s, he had built a formidable airline with 16 aircraft called the Bata Aerodrome (Letiště Baťov) that serviced Czechoslovakia, all major countries in Europe and other international destinations 5

Major Jan Ambruz was the Commanding Officer of the Czech Air Force Test Group in Prague in 1938. Major Ambruz, escaped from Czechoslovakia, served in France in mid-1940, and was then posted to the Czechoslovak 312th Squadron of the RAF.

including: Turkey, Egypt, and Syria, and other international destinations. Dr. J.A.Bata remained committed to the Czechoslovak pilots as can be seen by his financial support through his personal contribution of two Spitfire planes for Czechoslovak RAF pilots operating in Great Britain. When the Czechoslovak pilots’ quarters had been bombed out, it was Jan Bata who financed the rebuilding of their quarters6. In leaving Czechoslovakia, the normal route of escape for the Bata pilots was through Poland, and then by ship to France where they regrouped. The Czechoslovak pilots and army reorganized in France under Ambassador, Stephan Osusky, the highest-ranking official of the Czechoslovak government in exile. After the fall of France, the regrouped Czechoslovak army and pilots were stranded; Jan Bata, through his financial Lieutenant Frank Muska (located in the United States), arranged for one million French Francs to be used to assist in their evacuation from France. From preliminary research, the Bata pilots and airmen served in many different squadrons including the 68th, 138th, 240th , 310th, 311th, 312th, and 313th. The heaviest concentration of Bata pilots served in the 311th Squadron. Czechoslovak’s 311th Squadron suffered some of the heaviest losses of any Czechoslovak squadron during the war. The Bata pilots served as bomber pilots, fighter pilots, and on special operations missions, which included dropping agents behind enemy lines in occupied Czechoslovakia. One significant note is that the heaviest concentration of Bata airmen served in the Czechoslovak bomber crews of the 311th RAF Squadron; a squadron that suffered some of the heaviest casualties during the war from any Czechoslovak squadron – casualties amounting to fifty five percent of all Czechoslovak airmen who lost their lives. Jan Bata’s prewar chief pilot, Jan Serhant flew Jan Bata on the first successful business trip around the world, 6

Letter from U.S. Congressman Karl Stefan to W.B.Bradford Nov. 20, 1943 on Bata Contributions to Allied Cause.

completing the voyage on May 1st 1937 landing at the Bata Aerodrome in Batov (today Otrokovice) in Bata’s Lockheed L-10 Electra. Just two days before the German invasion, Pilots Serhant and Dolezal flew the L-10 Electra out of Czechoslovakia. Bata’s Electra ended up in Canada and used in the services of the Canadian RAF for surveillance off of the Canadian coastal waters in search of German submarines for the duration of the war. Jan Bata did not limit his drive for pilots only to Czechoslovakia. He did financed similar efforts in the United States assisting training Bata men in America to be pilots – at least a year before the United States declared war. An example of Bata’s effort is evidenced through an article American newspaper (clipping to the right), entitled, BATA SHOE COMPANY TO TRAIN BOYS TO FLY. Jan Bata’s intent to train American pilots can be seen in the following words, “that every apprentice of the Bata Industrial and Business Institute learns to fly7” The Bata plant in Belcamp, Maryland had nearly 1,000 employees at the time, many American pilots may have been trained by programs set up by Dr. Jan Antonin Bata. The purpose of this paper was to bring to light the incredible story of the Bata Czechoslovak pilots, and their leader Dr. Jan Antonin Bata a Czechoslovak aviation visionary who loved his country and believed in democracy and freedom. Bata Pilots and Airmen: The following are brief descriptions and listings of known Bata pilots and airmen who served in the Czechoslovak Squadrons of the RAF during the Second World War. F/Lt. Jan Serhant Pilot 68th Bomber Squadron. On October 7th, 1943, Serhant’s gunners shot down a twin engine German Luftwaffe Dornier Do. 217 bomber. Serhant’s bomber was identified by a boot crushing a Swastika, symbolizing his support for his former employer J.A.Bata. F/Lt. Oldrich Dolezal, Pilot for the 311th Squadron: On December 27th, 1943, Pilot Dolezal and his crew sunk a German blockade-runner and armed supply ship, the Alsterufer. On the day it was sunk, the Alsterufer was returning from a trip from Kobe, Japan to France.

Dolezal was immediately awarded the Distinguished Flying Cross (DFC) for his successful attack. F/Lt. Eduard Prchal, Pilot for the 310th Squadron (Battle of Britain) listed with 4 kills, potentially 6 enemy planes shot down. For two years before the war, Prchal worked as a transport pilot for Bata before the war. Major Jan Ambruz, Pilot: Test pilot for Bata’s Zlin XIII light Czechoslovak advance prototype fighter plane. Ambruz flew in the Battle of Britain. Later he served in the 312th Squadron. W/O Josef Pipa, Pilot for the 312th Squadron (Battle of Britain): Pipa was an apprenticed at the Baťa Shoe Company until 1937 when he went to the Elementary Flying School at Olomouc, and later transferred to the Fighter Pilot School in Prague in 1938. Pipa shared in the destruction of a number of JU88 reconnaissance bombers as well as the destruction of a Do.17 and the probable destruction of a Do. 215 bomber. On September 13th 1944, Pipa was returning from a mission saw a Mustang shot down into the sea. Pipa circled the plane and attempted to throw out his dingy to the downed pilot, succeeding only in wrapping the dinghy around his tail, yet managed to send out a mayday. The downed pilot was found and rescued by the Coastal Command. Pipa had similarly thrown out dinghys on two other occasions earlier in the. On July 9th, 1944, while flying a Spitfire near Folkstone, Kent shot down a V1 rocket. Pipa was one of the most highly decorated Czechoslovak airmen during the war. Sgt. Frant Seda, RAF Volunteer Reserve: Before the war Seda was a pilot employed by Bata in Zlin. At the time of the Munich agreement, he and another Bata pilot flew two Zlin XIIs to Gravesend, Great Britain that had been manufactured at the Zlinska Letecka (ZLAS) manufacturing company near Zlin. From shortly after his arrival in Great Britain, Seda had been employed at the Bata’s East Tilbury shoe manufacturing plant near London. List of Bata Pilots and Airmen Who Served in the Czechoslovak RAF Pre-Munich Test Pilot for the Bata Zlin XIII Fighter Plane: Czechoslovak Major Jan Ambrus BATTLE OF BRITAIN ROLE OF HONOR: Major Jan Ambrus (Czech CO), Squadron Leader 312th 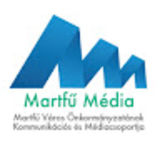