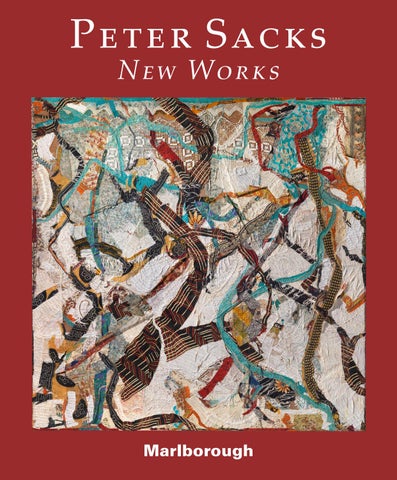 Peter Sacks was born in 1950 in Port Elizabeth, South Africa. He lived there for the first part of his

life, mostly in the city of Durban on the Indian Ocean. Sacks studied at Oxford, as well as, in the United States, at Princeton and Yale. He is the author of five books of poetry and The English Elegy, a work of criticism. Works by Peter Sacks can be found in numerous collections including The Metropolitan Museum of Art, New York, NY, Museum of Fine Arts, Boston, MA, and Museum of Fine Arts, Houston, TX. The artist currently divides his time between Massachusetts, Connecticut and New York.

N o Ref ug e by S eb asti an Sm ee In a turn from the sobriety of his impressive earlier work – from the feeling that nothing could possibly grow from their ancient, compacted surfaces – Peter Sacks’ new works pulse with life. They have rhythm, color, twisting limbs, a singing voice. Their beauty is polyphonic. But the turn from earlier modes is not a rejection. More or less the same means are employed. The new works still hit the eye as a kind of debris field, a harrowing index to catastrophe. But in their visual brilliance, their material variety, and their hard-won coherence, they confirm that – amid the convulsions of history, the unfolding fiasco – the parade of life goes on. Sacks’ new works are as ambitious, full-throated, and convincing as any I have seen by a living artist over the past decade. They feel less lonely, too, than his earlier works, where you felt the hubbub of suffering voices as if from under the rubble of a collapsed Tower of Babel. Here, the hubbub feels close, proximate, a breathing presence, as if emitted from the other side of a wall of rough fabric in a makeshift tent city. A heartbeat. Connective tissue. Tendrils of possibility. And always, behind the richly textured surfaces of these works, you feel the artist laboring, revivifying, resisting. Humble before the weight of his materials and the human predicaments they conjure, Sacks casts himself in the roles of mourner, magician, celebrant, and salvage artist. “We have, by now, mowed down so much of ourselves and of the planet,” Sacks has said, “and injured what I take to be the almost sacramental nature of materiality itself … But the powerful resistance of materiality is, for me, a source of accountability as well as a celebration of what it is to be in a human body. The surfaces themselves, I hope, elicit not only an intimation of what is underneath, but also of what is constantly rising to the surface.” Bodies rising – and writhing, too, like shamanistic dancers, whirling dervishes – are suggested most powerfully both by the Kyoto Protocol triptych and by series of works on paper called Codex. The title, a reference to text from ancient manuscripts, derives from the connection Sacks makes between these flowing glyphs – twisting, rolling strips of colored, patterned fabric – and calligraphy. Each work in the series could be a letter from an unknown alphabet. Seen sequentially, the series of frozen movements conjures Eadweard Muybridge’s stop-motion photographs of humans and animals. But, despite the laboriousness of their making, they are wilder, more intuitive, and more animated than photographs. They constitute a kind of ecstatic drawing, and speak to two ideas that permeate all Sacks’s recent work: that the body can be transcended through movement; and that spiritual repair may be effected through an intuitive absorption in making. The white grounds of the Codex works suggest the shaping elements – water, or wind. The glyphs themselves seem to dart and pulse in three dimensions like schools of tropical fish. Turquoise is a key color throughout Sacks’s recent body of work. It is a strong element in Report from the Besieged City; it dominates the magisterial Garden of Earthly Delights, where it is complemented by rhythmically dispersed punches of yellow; and it laces its way through Icarus, Road to the Interior, and several of the Township works. Life-giving simply by virtue of its intensity, the color (which was used most dazzlingly by Van Gogh in Arles and Matisse in Morocco) can double as a kind of toxin. In the lower parts of Sacks’ No Refuge, a dazzling triptych created over two years, the color evokes a river, or the sea – perhaps the Aegean, where displaced families from war-torn Syria swarm in a struggle for life. The hand-typed text that appears on the surface of No Refuge is drawn from UN and newspaper reports from the Greek island of Lesbos, where tens of thousands of refugees of different backgrounds have sought sanctuary after dangerous voyages, only to live in a soul-crushing limbo. Sacks suggests these refugees with figures cut from a black patterned fabric. Their shapes get larger and more animated as the eye follows them from left to right, and they move against a riot of patterned fabrics that evoke discarded lives, makeshift shelters, and abandoned heritages. Strong lines crisscrossing the surface of the work may be read as borders and walls. None of this is literal, and the work’s compacted power is scarcely illustrational. It’s the product of a sophisticated, intuitive accretion of layers of fabric and the resulting interplay of line, color, pattern, and texture. “I make them one step at a time,” Sacks has said, “watching what happens when things begin to materially interfere on the canvas with various kinds of fabrics, textures, materials, wood, cardboard, clothing. In a certain sense, it’s up to the materials to show me the way.”

The relationship in art between meaning, feeling and formal properties is promiscuous, not pure. The rhythms Sacks establishes across the complex, layered surface of No Refuge, for instance, are “formal,” in one sense. But they could also be said to create a dynamic of blockage and access, impediment and yielding that speaks to the real predicaments of real people. Sacks’ salvaged fabrics, meanwhile, speak simultaneously to the intimacy of worn and warming garments and – in their heterogeneity, their vast geographic spread – to our contemporary globalized condition. Sacks has listed them: “Shrouds, prison and work shirts, nightshirts, 19th-century trousseau laces, machine-made laces, crochet, metal rings, denim work clothes, buttons, eyelets, rope, fishing nets (many kinds of repaired nets), embroidery, as well as pieces of African fabric, burlap sacks and, more recently, old cotton fabrics from India. This,” he continues, “is in addition to wood, metal, cardboard, batting, quilting and so on.” The process is painstaking. Sacks wryly describes it as “slow action painting” or like “excavating in reverse.” He has described the results as “communities of labour, the accumulations of what is left when human life has been lived and some drastic change strikes it and, in so doing, also disorganises the relations between high and low artefacts… “Entire lives, whole communities,” he continues, “are brought into the field of the painting, [so that] the painting itself becomes another community.” Garden of Earthly Delights reads as a kind of map of extinctions – of both species and sacred sites. Made up of 80 separate squares, the painting establishes a sophisticated tension between continuity and discontinuity, as some patterns and lines cut out at the edge of each square while others migrate from one to the next. The work has something kinetic and fuguelike about it. Fragments of text (by Osip Mandelstam and Dante, for instance) typed out by the artist on white linen are interspersed with lace, striped and floral cloths, and even a photograph. Certain motifs reappear at various intervals, and the work’s meandering lines and self-spawning patterns traverse the field like ancient songlines. Sacks is able to conjure a sense of deep history as well as vast distance in these large-scale paintings. Among the prints from Africa and India in his Purgatorio Sequence, he uses liberal amounts of Normandy lace from an Abbey near Bayeux, a region of France suffused with history, from 1066 through to D-Day. Similar cloths were brought to the artist’s native South Africa by French Huguenots and the Dutch. In Letters from the 20th Century, a masterpiece from Sacks’s Townships series, the palette is reduced to black, white and red, with an emphasis on rectilinear shapes that suggest piano keys or cities or the chimneys of factories and gas chambers. A subtle black and white photograph of Zbigniew Herbert lighting a cigarette is repeated (but this time obscured by smoke) in another part of the composition; it acts in counterpoint to the veiled image of Marcel Proust: Two different visions of the century just past. Texts from Herbert and reflections from Sacks himself appear in various places, as do colonial maps of Africa and images of ancient Assyrian sculpture. It is hard to overstate the complexity of this work, and of others in the Township series. Allusions to Greek mythology – Icarus, for instance – are embedded in fields of lace (often with its own figurative imagery) and culturally loaded patterned prints from Africa and India. These appear alongside photographs and texts that draw historical and deep spiritual links between, for instance, John Ruskin, Leo Tolstoy, Virginia Woolf, Mahatma Gandhi, and Nelson Mandela, and between the United Kingdom, India, and Africa. But in these new works, despite the density of allusion, there is something fluid and dreamlike about the results. “My work,” Sacks has said, “is a meeting point of spirit and matter, matter ennobled by labor.” The materials he uses and the works themselves – palpably made artifacts – are, very simply, “residues of the human desire to make, of the obligation to make – out of ritual belief, out of necessity, out of delight – even out of danger, scarcity, the need to survive.”

Sebastian Smee is a Pulitzer-Prize winning arts critic for the Boston Globe. He is also the author of Lucien Freud, Side by Side: Picasso vs Matisse, and, most recently, The Art of Rivalry. 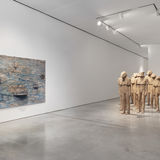