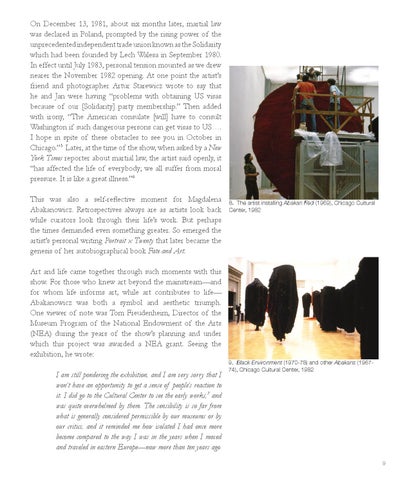 On December 13, 1981, about six months later, martial law was declared in Poland, prompted by the rising power of the unprecedented independent trade union known as the Solidarity which had been founded by Lech Walesa in September 1980. In effect until July 1983, personal tension mounted as we drew nearer the November 1982 opening. At one point the artist’s friend and photographer Artur Starewicz wrote to say that he and Jan were having “problems with obtaining US visas because of our [Solidarity] party membership.” Then added with irony, “The American consulate [will] have to consult Washington if such dangerous persons can get visas to US…. I hope in spite of these obstacles to see you in October in Chicago.”5 Later, at the time of the show, when asked by a New York Times reporter about martial law, the artist said openly, it “has affected the life of everybody; we all suffer from moral pressure. It is like a great illness.”6 This was also a self-reflective moment for Magdalena Abakanowicz. Retrospectives always are as artists look back while curators look through their life’s work. But perhaps the times demanded even something greater. So emerged the artist’s personal writing Portrait x Twenty that later became the genesis of her autobiographical book Fate and Art. Art and life came together through such moments with this show. For those who knew art beyond the mainstream—and for whom life informs art, while art contributes to life— Abakanowicz was both a symbol and aesthetic triumph. One viewer of note was Tom Freudenheim, Director of the Museum Program of the National Endowment of the Arts (NEA) during the years of the show’s planning and under which this project was awarded a NEA grant. Seeing the exhibition, he wrote: I am still pondering the exhibition, and I am very sorry that I won’t have an opportunity to get a sense of people’s reaction to it. I did go to the Cultural Center to see the early works,7 and was quite overwhelmed by them. The sensibility is so far from what is generally considered permissible by our museums or by our critics, and it reminded me how isolated I had once more become compared to the way I was in the years when I moved and traveled in eastern Europe—now more than ten years ago.