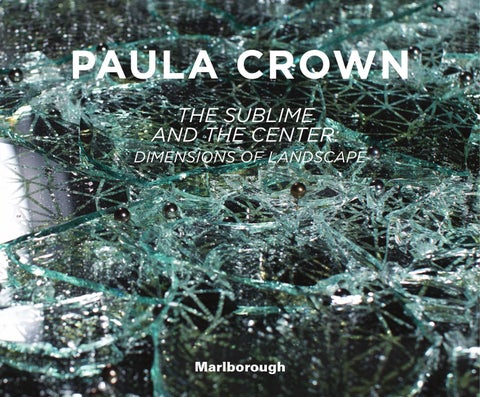 THE SUBLIME AND THE CENTER: DIMENSIONS OF L ANDSCAPE

MICHELLE GRABNER I have a tiny little secret hope that, after a decent period of silence and prose, I will find myself in some almost impossible life situation and will respond to this with outcries of rage, rage and love, such as the world has never heard before. Like Yeats's great outburst at the end of his life. This comes out of a feeling that endowment is a very small part of achievement. I would rate it about fifteen or twenty percent. Then you have historical luck, personal luck, health, things like that, then you have hard work, sweat. And you have ambition. — John Berryman in an interview with Peter A. Stitt, The Art of Poetry No. 16, Paris Review, Winter 1972 You can be shaped, or you can be broken. There is not much in between. Try to learn. Be coachable. Try to learn from everybody, especially those who fail. This is hard. —David Foster Wallace, Infinite Jest 1997 What was it like to take high tea with William Butler Yeats? Berrymen: He said, “I never revise now”—you know how much he revised his stuff—“ but in the interests of a more passionate syntax.” Now that struck me as a very good remark. I have no idea what it meant and still don't know, but the longer I think about it, the better I like it. — John Berryman in an interview with Peter A. Stitt, The Art of Poetry No. 16, Paris Review, Winter 1972 The really important kind of freedom involves attention, and awareness, and discipline, and effort, and being able truly to care about other people and to sacrifice for them, over and over, in myriad petty little unsexy ways, every day. — David Foster Wallace, This is Water, 2009 The above volley of introductory quotes weaves together the opinions of three very different authors, John Berryman, David Foster Wallace, and William Butler Yeats. Together these quotes seek to give words to the clichés offered about life, art and inspiration. Unfortunately today we all-too-often avoid probing these significant questions for fear that their unwieldiness will be interpreted as trivial. As Jacques Derrida informed us many years ago, these sorts of inquiries--whether we are asking, ‘what is art?’ or ‘what is interpretation?’ --assume an ontological perspective, and bring forth an answer based on essences and generalities. Thus we actively avoid these sorts of questions because they will inevitably land us in a bevy of unworkable clichés. Instead, what peaked Derrida’s interest was textuality: “a residue, a remainder or excess which unsettles stable meaning and interpretive control.” He believed that if enough critical pressure was applied to every kind of writing then a “disruptive semantic excess can be tracked in every kind of writing, whether it be Plato, Kant and Hussel or Mallarme, Joyce and Genet,” or in this case, Berryman, Foster Wallace or Yeats.1 In 1981 at the Goethe-Institut in Paris, Derrida the deconstructivist and the German hermeneutic philosopher Hans-Georg Gadamer engaged in a contentiously disappointing non-debate in a symposium titled “Text and Interpretation.” Both thinkers, indebted to Heidegger’s understanding that language and meaning are the same, and that “ambiguity” and “otherness” are vital to works of literature, grounded their views on interpretation. Together they firmly rejected the idea that there could be any single correct and exhaustive meaning in a text. But regardless of their shared positions, “a serious intellectual encounter never really happened.” Derrida took the brunt of the critical fall-out. His

non-engagement “evaded the danger that he might learn something from Gadamer.”2 With impenetrable words, Derrida dove deep into the inconsequential margins of Gadamer’s analysis. Gadamer flailed, arguing that Derrida misunderstood him and in frustration claiming that, “Even immoral beings try to understand one another… Whoever opens his mouth wants to be understood; otherwise, one would neither speak nor write.”3 Regardless of Gadamer’s fraught attempt to engage, Derrida’s position remained “vaguely defined, unlocatable, and possibly not actually held by him.”4 I bring forward this now humorous account and ridiculously “failed-debate” for several reasons. The most obvious reason being that interpretation is central to the idea of art making. Yet if interpretation of artwork is no more stable a discipline than art making itself, then how does one go about developing and nurturing a philosophically weighty studio practice? And forgive me if I am now rhetorically posing a kind of Derrida-disapproving ‘what is…?’ question. But to accurately understand Paula Crown’s studio practice the viewer/reader is obliged to engage with big and often difficult questions about the nature of knowledge. The discourses at play in her work are composed of a blended set of critical, historical and philosophical features. To use Wittgenstein’s words, “a complicated network of similarities overlapping and criss-crossing.”5 And if, as Giles Deleuze and Felix Guattari claim, “art is a mirror which goes fast like a watch sometimes,” then the depth of Crown’s work needs both a critical and ethical foundation to unlock its radical indeterminacy and its polyvalent forms.6 A simple place to begin this examination of Crown’s work is with Tinh T. Minh-ha, who passionately asserts that “[i]f art can be neatly contained in systematic forms of closure, if it can be made to be an object of knowledge, then it no longer is art. Its very ‘essence’ rests upon its elements of inexplicability and of wonder. Or else why would anyone engage in artistic work, whose value lies precisely in its inability to prove itself worth the price or the attention demanded.” Crown knows this well. In her work and in her studio lab, she engages in the act of complicating ideas, not in reinforcing systems of closure. For example, Crown nurtures an evolving collection of words, postulations, quotes, and theories that holds a place of pride on a wall located at the heart of her workplace. Familiar and obscure texts by Pablo Picasso, Agnes Martin, Ada Lovelace, Robert Rauschenberg and even a quote from the Disney animation Mulan punctuate this wall. T.S. Elliot, William Blake, and Howard Gardner also contribute insights and intellectual positions that contribute to Crown’s dense web of scientific and philosophical reference points. However, this is not a collection of motivational material but a rigorous exercise in transformation, a site where Crown can gather, “modify, appropriate, and reappropriate without being trapped in imitations.”8 One cannot help but establish a direct relationship between the language comprising Crown’s ALPHABRAVO compositions and the fluidity of language that constitutes her collective rhizome. “The meaning of the text in this view is not an object but a practice. It emerges from constant traffic between work and reader, so that (to put the matter in Lacanian idiom) the act of reading is a project in which one receives back one’s own response from the other (the text) in transfigured or defamiliarised form.”9 This brings us to Crown’s sculptures, installation, and paintings. In an essay penned by curator Douglas Fogel on Mark Grotjahn’s work he writes, “the truth is that all of these works are simultaneously figurative and abstract, mimetic and expressive, systematic and idiosyncratic.”10 The same must be said for Crown’s vast studio output. And depending on the project and its conceptual underpinnings, she may employ experimental cutting-edge digital technology, low-tech industrial applications, or traditional studio techniques. These often-impressive methods of production only matter because they aptly reinforce her interest in developing “a new system of ideas, alternative ways of seeing and experiencing.”11 Take for example the immersive fractal work developed specifically for Marlborough’s 57th Street gallery. Crown’s long and steady protraction of traditional landscape drawings translated into fractals has matured into an impressive and multifarious group of sculptural and painting conceits. In this exhibition her fractals take the form of an intricately pieced tonal marble floor flanked by impressive reflective etched glass panels. The chimerical installation is completed by a hovering calligraphic cloud formation that appears to float above the marble surface. Each of these elements demands precision engineering to establish an uncanny relationship between the viewer’s body and a landscape of vectors, geometries and light. However beauty and precision are not exclusive to the high production quality works in Crown’s show. Crown’s large-scale fractals on canvas combine direct painting with a digital output. Authoritative in their graphical information, it is impossible for the viewer’s imagination to comprehend the literalness of location. Thus these landscapes are both fiction and nonfiction, real and imaginary. The same can be said of Crown’s silvery pattern paintings culled from her family’s kitchen carpet. To scale, this topographical textile is contact-printed directly onto

stretched canvas, indexing its decorative contours and exposing an inexact and performative method of recording. The conceptual inverse of the carpet paintings would be the perforated mirror walls. Although pattern is fundamental to both bodies of work, the thingness of the contact carpet prints gives way to the immateriality of reflection. The viewer’s body is doubled and destabilized in the mirror. Time and space are abstracted and wholeness is achieved only within each small circular perforation. The BEARINGS DOWN work and the Infinity Mirror function with the same elusive sense of objecthood. Despite their stabilized display apparatus, the infinite mirrored imaging confounds the solidity of steel ball bearings and the delineations of etched glass. Duchamp’s Large Glass, “The Bride Stripped Bare by Her Bachelors, Even,” gives historical footing to all of Crown’s glass constructions. Seizing the material’s illusionist qualities while exploiting its structural limitations opens up conceptual investigations into temporal strategies. Infinitude is thrown into relationship with singularity. The limitlessness inherent in reflection pushes up against the corporeal bodies that encounter Crown’s metaphysical and sculptural landscapes. When addressing his Large Glass, Duchamp stated that “The glass, being transparent, was able to give its maximum effectiveness to the rigidity of perspective.”12 Crown’s glass works elegantly extend Duchamp’s play with perspective yet they also make philosophical room to further survey the mind-body problem and other such dualisms that manifest between the physical laws of the universe and perception. The analytic and the systematic, the individual and the collective, the descriptive and the revisionary, the rational and the empirical are compellingly negotiated within the peaks and valleys of Crown’s reflective topographies. PERforations might be the exemplary metaphor for Crown’s overarching oeuvre. These punctuated holes have followed Crown from the beginning when she was recording the South African landscape from a helicopter with a marker and spiral-bound sketchpad in hand. Transfiguring paper perforations into objects gives dimensional form to the concepts of both alienation and of connectivity. Crown is expansive with this motif, building unique perforated sculptures that range from the iconic and intimate to the architectonic. No longer flat, it is difficult to identify function when these paper fringes are enlarged and occupy the three-dimensional world. Yet their odd familiarity, regularity and enclosed pocket of space imply utility. Crown’s protracted use of PERforations is an example of her relentless curiosity into multiple modes of address. Crown spiritedly explores “multiple ways meaning can be represented while avoiding methods of address that, in their exclusiveness and singularity, might well reflect oppressive theoretical and procedural approaches.”13 Partial fragments and relations, provisional analytic fields, shifting energies and cultural status, displacements and improvisations are the creative forces Crown deploys in her studio research. Yet this doesn't mean she is dodging philosophy’s fundamental problem ‘what can I know?’ On the contrary, her work points to two other questions, ‘what must I do?’ and ‘what can I hope for?’ Crown’s work may not resolve these questions but at least she is courageous enough to ask them, putting her in company with Berryman, Yeats, and Wallace. 1

The artist lives and works in Aspen, Colorado and Chicago, Illinois.

Paula Crown | The Sublime and the Center: Dimensions of Landscape

Paula Crown | The Sublime and the Center: Dimensions of Landscape