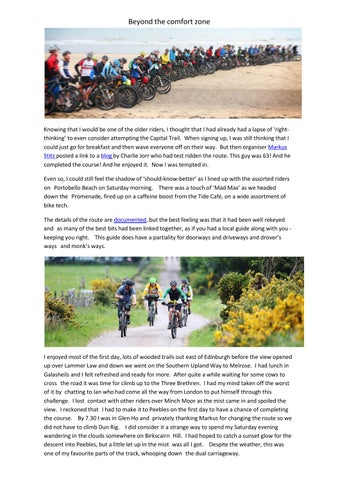 Knowing that I would be one of the older riders, I thought that I had already had a lapse of ‘rightthinking’ to even consider attempting the Capital Trail. When signing up, I was still thinking that I could just go for breakfast and then wave everyone off on their way. But then organiser Markus Stitz posted a link to a blog by Charlie Jorr who had test ridden the route. This guy was 63! And he completed the course! And he enjoyed it. Now I was tempted in. Even so, I could still feel the shadow of ‘should-know-better’ as I lined up with the assorted riders on Portobello Beach on Saturday morning. There was a touch of ‘Mad Max’ as we headed down the Promenade, fired up on a caffeine boost from the Tide Café, on a wide assortment of bike tech. The details of the route are documented, but the best feeling was that it had been well rekeyed and as many of the best bits had been linked together, as if you had a local guide along with you keeping you right. This guide does have a partiality for doorways and driveways and drover’s ways and monk’s ways.

I enjoyed most of the first day, lots of wooded trails out east of Edinburgh before the view opened up over Lammer Law and down we went on the Southern Upland Way to Melrose. I had lunch in Galasheils and I felt refreshed and ready for more. After quite a while waiting for some cows to cross the road it was time for climb up to the Three Brethren. I had my mind taken off the worst of it by chatting to Ian who had come all the way from London to put himself through this challenge. I lost contact with other riders over Minch Moor as the mist came in and spoiled the view. I reckoned that I had to make it to Peebles on the first day to have a chance of completing the course. By 7.30 I was in Glen Ho and privately thanking Markus for changing the route so we did not have to climb Dun Rig. I did consider it a strange way to spend my Saturday evening wandering in the clouds somewhere on Birkscairn Hill. I had hoped to catch a sunset glow for the descent into Peebles, but a little let up in the mist was all I got. Despite the weather, this was one of my favourite parts of the track, whooping down the dual carriageway.

By 10 pm I had snacked and was preparing to make my way up to Spooky Wood. Unfortunately at this point the batteries in my GPS died and lost the record of the longest day of cycling that I have ever completed. Luckily Spooky Wood did not live up to its name, and my lack of sleep had much more to do with dampness from cloud and condensation than supernatural interference. I was ready to set off again at the top of the trail at 7 am with the idea of a decent breakfast in Peebles to set me up for the day. My Spooky trail descent was a little creaky after the night on the pine cones, but by Berm Baby Berm I was warming up. It was a rare thing to get the Glentress trails to myself. Another of Markus’ scenic rooty riverside trails took me into Peebles, but it was only on reaching the outskirts that I realised that I had not come across a welcoming café, and so I ended up snacking outside a corner shop in the drizzle. I only saw one other Capital Trail rider on the Sunday. We passed on the climb out of Peebles and leapfrogged our way back to Edinburgh. My legs were not cooperating much, which led to a fair bit of hill climbing on foot. I thought I was making progress once I had cleared Drum Maw and when crossing the A701 saw a sign saying Edinburgh 17 miles which seemed to confirm my thought. I enjoyed the quaintness of West Linton, not stopping for lunch as I was under the impression that I was close to the finish. Soon afterwards, I got to the sign for the Nine Mile Burn, which I took as a warning and sure enough the climb up Monk’s Rig was arduous. Eventually, the payoff came in the long, flowing descent off the Pentlands. I could not believe that such wild hills were so close to Edinburgh. I should have studied the map more, because I would have seen that Markus had more fun for us as we had to head back along Logan Burn and over Harbour Hill before we could finally sneak into town. The trail re-acclimatised us to civilisation and a sunny Sunday afternoon in Edinburgh via the beautiful Waters of Leith. The Royal Mile was heaving with tourists who were probably wondering why a collection of slightly grubby mountainbikers kept passing by. Holyrood came and went and soon enough I was heading back along the Promenade to the beach at Portobello. It was hard to believe that my legs had powered me around this mystery tour, and now I was back where I had started. Markus was at the Tide Café, ready to clock us in and swap notes from the road. Reaction: Knackered, but sorely satisfied! 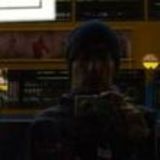 Ride Report from Jeremy Stevenson about the Capital Trail

Ride Report from Jeremy Stevenson about the Capital Trail