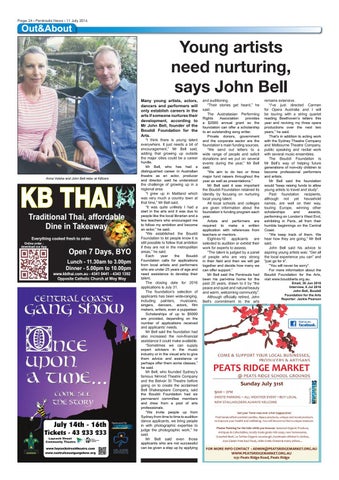 Young artists need nurturing, says John Bell Many young artists, actors, dancers and performers will only establish careers in the arts if someone nurtures their development, according to Mr John Bell, founder of the Bouddi Foundation for the Arts.

“I think there is young talent everywhere. It just needs a bit of encouragement,” Mr Bell said, adding that growing up outside the major cities could be a career hurdle. Mr Bell, who has had a distinguished career in Australian theatre as an actor, producer and director, said he understood the challenge of growing up in a regional area. “I grew up in Maitland which was very much a country town at that time,” Mr Bell said. “It was quite unlikely I had a start in the arts and it was due to people like the local librarian and a few teachers who encouraged me to follow my ambition and become an actor,” he said. “We established the Bouddi Foundation to let people know it is still possible to follow that ambition if they are not in the metropolitan areas,” he said. Each year the Bouddi Foundation calls for applications from local artists and performers who are under 25 years of age and need assistance to develop their talent. The closing date for 2016 applications is July 31. The foundation’s selection of applicants has been wide-ranging, including painters, musicians, singers, dancers, actors, film makers, writers, even a puppeteer. Scholarships of up to $5000 are provided, depending on the number of applications received and applicants’ needs. Mr Bell said the foundation had also increased the non-financial assistance it could make available. “Sometimes we can supply expert advisers in the music industry or in the visual arts to give them advice and assistance or perhaps offer them some classes,” he said. Mr Bell, who founded Sydney’s famous Nimrod Theatre Company and the Belvoir St Theatre before going on to create the acclaimed Bell Shakespeare Company, said the Bouddi Foundation had six permanent committee members and drew from a pool of arts professionals. “We invite people up from Sydney from time to time to audition dance applicants, we bring people in with photographic expertise to judge the photographic work,” he said. Mr Bell said even those applicants who are not successful can be given a step up by applying

and auditioning. “Their stories get heard,” he said. The Australasian Performing Rights Association provides a $2000 annual grant so the foundation can offer a scholarship to an outstanding song writer. Private donors, government and the corporate sector are the foundation’s main funding sources. “We send out letters to a wide range of people and solicit donations and we put on several events during the year,” Mr Bell said. “We aim to do two or three major fund raisers throughout the year as well as presentations.” Mr Bell said it was important the Bouddi Foundation retained its identity by focusing on nurturing local young talent. All local schools and colleges are given information about the foundation’s funding program each year. Artists and performers are required to make a written application with references from teachers or mentors. Eight-to-10 applicants are selected to audition or exhibit their work for experts to assess. “The talent is judged by a panel of people who are very strong in their field and then we will get together and decide how many we can offer support.” Mr Bell said the Peninsula had been his part-time home for the past 20 years, drawn to it by “the peace and quiet and natural beauty and warm, welcoming community”. Although officially retired, John Bell’s commitment to the arts

remains extensive. “I’ve just directed Carmen for Opera Australia and I will be touring with a string quartet reading Beethoven’s letters this year and reviving my three opera productions over the next two years,” he said. That’s in addition to acting work with the Sydney Theatre Company and Melbourne Theatre Company, public speaking and recital work with several music ensembles. The Bouddi Foundation is Mr Bell’s way of helping future generations of non-city children to become professional performers and artists. Mr Bell said the foundation would “keep raising funds to allow young artists to travel and study”. Past foundation recipients, although not yet household names, are well on their way, touring Europe, winning other scholarships and awards, performing on London’s West End, exhibiting in Paris, all from their humble beginnings on the Central Coast. “We keep track of them. We hear how they are going,” Mr Bell said. John Bell said his advice to aspiring young artists was: “Get all the local experience you can” and “just go for it”. “You will never be sorry”. For more information about the Bouddi Foundation for the Arts, visit www.bouddiarts.org.au. Email, 30 Jun 2016 Interview, 6 Jul 2016 John Bell, Bouddi Foundation for the Arts Reporter: Jackie Pearson