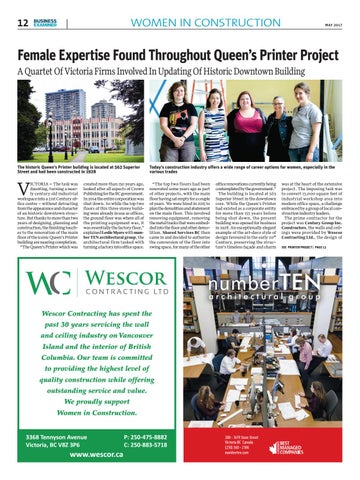 ICTORIA – The task was daunting, turning a nearly century old industrial workspace into a 21st Century office centre – without detracting from the appearance and character of an historic downtown structure. But thanks to more than two years of designing, planning and construction, the finishing touches to the renovation of the main floor of the iconic Queen’s Printer building are nearing completion. “The Queen’s Printer which was

created more than 150 years ago, looked after all aspects of Crown Publishing for the BC government. In 2014 the entire corporation was shut down. So while the top two floors of this three storey building were already in use as offices, the ground floor was where all of the printing equipment was, it was essentially the factory floor,” explained Leslie Myers with number TEN architectural group, the architectural firm tasked with turning a factory into office space.

Today’s construction industry offers a wide range of career options for women, especially in the various trades “The top two floors had been renovated some years ago as part of other projects, with the main floor having sat empty for a couple of years. We were hired in 2015 to plan the demolition and abatement on the main floor. This involved removing equipment, removing the metal tracks that were embedded into the floor and other demolition. Shared Services BC then came in and decided to authorize the conversion of the floor into swing space, for many of the other

office renovations currently being contemplated by the government.” The building is located at 563 Superior Street in the downtown core. While the Queen’s Printer had existed as a corporate entity for more than 155 years before being shut down, the present building was opened for business in 1928. An exceptionally elegant example of the art-deco style of design favoured in the early 20th Century, preserving the structure’s timeless façade and charm

Wescor Contracting has spent the past 30 years servicing the wall and ceiling industry on Vancouver Island and the interior of British Columbia. Our team is committed to providing the highest level of quality construction while offering outstanding service and value. We proudly support Women in Construction. 3368 Tennyson Avenue Victoria, BC V8Z 3P6

was at the heart of the extensive project. The imposing task was to convert 13,000 square feet of industrial workshop area into modern office space, a challenge embraced by a group of local construction industry leaders. The prime contractor for the project was Century Group Inc. Constructors, the walls and ceilings were provided by Wescor Contracting Ltd., the design of SEE PRINTER PROJECT |  PAGE 13