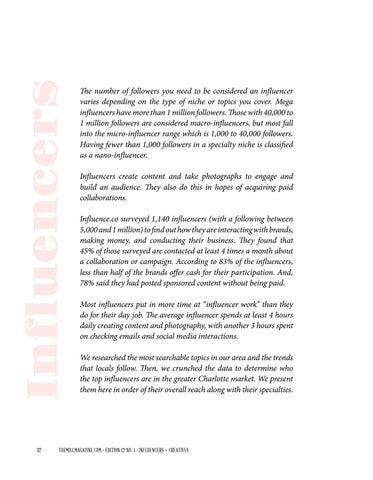 The number of followers you need to be considered an influencer varies depending on the type of niche or topics you cover. Mega influencers have more than 1 million followers. Those with 40,000 to 1 million followers are considered macro-influencers, but most fall into the micro-influencer range which is 1,000 to 40,000 followers. Having fewer than 1,000 followers in a specialty niche is classified as a nano-influencer. Influencers create content and take photographs to engage and build an audience. They also do this in hopes of acquiring paid collaborations. Influence.co surveyed 1,140 influencers (with a following between 5,000 and 1 million) to find out how they are interacting with brands, making money, and conducting their business. They found that 45% of those surveyed are contacted at least 4 times a month about a collaboration or campaign. According to 83% of the influencers, less than half of the brands offer cash for their participation. And, 78% said they had posted sponsored content without being paid. Most influencers put in more time at “influencer work” than they do for their day job. The average influencer spends at least 4 hours daily creating content and photography, with another 3 hours spent on checking emails and social media interactions. We researched the most searchable topics in our area and the trends that locals follow. Then, we crunched the data to determine who the top influencers are in the greater Charlotte market. We present them here in order of their overall reach along with their specialties. 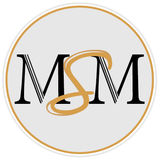