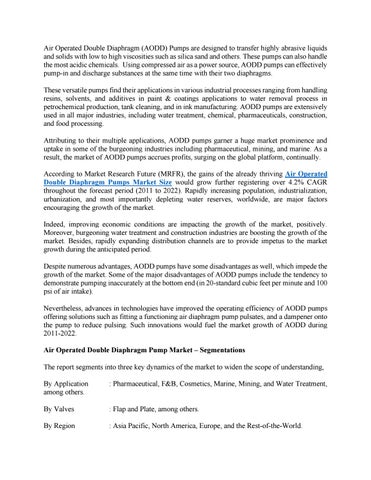 Air Operated Double Diaphragm (AODD) Pumps are designed to transfer highly abrasive liquids and solids with low to high viscosities such as silica sand and others. These pumps can also handle the most acidic chemicals. Using compressed air as a power source, AODD pumps can effectively pump-in and discharge substances at the same time with their two diaphragms. These versatile pumps find their applications in various industrial processes ranging from handling resins, solvents, and additives in paint & coatings applications to water removal process in petrochemical production, tank cleaning, and in ink manufacturing. AODD pumps are extensively used in all major industries, including water treatment, chemical, pharmaceuticals, construction, and food processing. Attributing to their multiple applications, AODD pumps garner a huge market prominence and uptake in some of the burgeoning industries including pharmaceutical, mining, and marine. As a result, the market of AODD pumps accrues profits, surging on the global platform, continually. According to Market Research Future (MRFR), the gains of the already thriving Air Operated Double Diaphragm Pumps Market Size would grow further registering over 4.2% CAGR throughout the forecast period (2011 to 2022). Rapidly increasing population, industrialization, urbanization, and most importantly depleting water reserves, worldwide, are major factors encouraging the growth of the market. Indeed, improving economic conditions are impacting the growth of the market, positively. Moreover, burgeoning water treatment and construction industries are boosting the growth of the market. Besides, rapidly expanding distribution channels are to provide impetus to the market growth during the anticipated period. Despite numerous advantages, AODD pumps have some disadvantages as well, which impede the growth of the market. Some of the major disadvantages of AODD pumps include the tendency to demonstrate pumping inaccurately at the bottom end (in 20-standard cubic feet per minute and 100 psi of air intake). Nevertheless, advances in technologies have improved the operating efficiency of AODD pumps offering solutions such as fitting a functioning air diaphragm pump pulsates, and a dampener onto the pump to reduce pulsing. Such innovations would fuel the market growth of AODD during 2011-2022. Air Operated Double Diaphragm Pump Market â&#x20AC;&#x201C; Segmentations The report segments into three key dynamics of the market to widen the scope of understanding, By Application among others.

: Flap and Plate, among others.

Global AODD Pump Market – Regional Analysis The European region leads the global AODD pumps market and is projected to continue with its dominance throughout the forecast period. Factors such as the extensive use of AODD pumps in various rapidly growing industries in the region such as food and beverage, healthcare, hospitality, pharmaceuticals, and personal care, drive the regional market. The proliferating healthcare sector, backed by the resurging economy, is brilliantly fostering the growth of the regional market, allowing the region to acquire a significant market share. The AODD pumps market in North America takes the second lead and is expected to grow at a considerable CAGR during the assessment period. Favorable government support and initiatives drive the growth in the market, extensively. Highly demanding research and development initiatives would allow the region to create substantial revenue pockets. Furthermore, high healthcare expenditures and significant investments in the R&D activities in the field of healthcare are some of the factors that would substantiate the growth of the regional market. The Asia Pacific AODD pump market is emerging as a profitable market. Some of the APAC countries, such as India and China, that account over half of the world’s total population, provide immense growth opportunities to the regional market to grow and flourish. The region is estimated to register an impressive CAGR during the review period. Air Operated Double Diaphragm Pump Market– Competitive Landscape Highly competitive, the AODD pump market appears to be fragmented due to the presence of several large and small-scale players. Players invest substantially in new product development, which has always been their key strategy to gain a competitive advantage in the market, along with other strategies such as mergers & acquisitions, innovation, and brand reinforcement. Major Players: Players leading the AODD pump market include Warren Rupp, Graco, Wilden, ARO, TAPFLO, DellMeco, Murzan, Verder, Depa, and Debem, among others. About Market Research Future: At Market Research Future (MRFR), we enable our customers to unravel the complexity of various industries through our Cooked Research Report (CRR), Half-Cooked Research Reports (HCRR), Raw Research Reports (3R), Continuous-Feed Research (CFR), and Market Research & Consulting Services. Contact: Market Research Future +1 646 845 9312