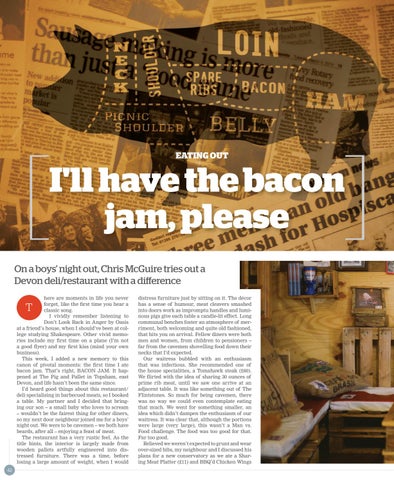 I'll have the bacon jam, please On a boys' night out, Chris McGuire tries out a Devon deli/restaurant with a difference here are moments in life you never forget, like the first time you hear a classic song. I vividly remember listening to Don’t Look Back in Anger by Oasis at a friend’s house, when I should’ve been at college studying Shakespeare. Other vivid memories include my first time on a plane (I’m not a good flyer) and my first kiss (mind your own business). This week, I added a new memory to this canon of pivotal moments: the first time I ate bacon jam. That’s right, BACON JAM. It happened at The Pig and Pallet in Topsham, east Devon, and life hasn’t been the same since. I’d heard good things about this restaurant/ deli specialising in barbecued meats, so I booked a table. My partner and I decided that bringing our son – a small baby who loves to scream – wouldn’t be the fairest thing for other diners, so my next door neighbour joined me for a boys’ night out. We were to be cavemen – we both have beards, after all – enjoying a feast of meat. The restaurant has a very rustic feel. As the title hints, the interior is largely made from wooden pallets artfully engineered into distressed furniture. There was a time, before losing a large amount of weight, when I would

distress furniture just by sitting on it. The décor has a sense of humour, meat cleavers smashed into doors work as impromptu handles and luminous pigs give each table a candle-lit effect. Long communal benches foster an atmosphere of merriment, both welcoming and quite old fashioned, that hits you on arrival. Fellow diners were both men and women, from children to pensioners – far from the cavemen shovelling food down their necks that I’d expected. Our waitress bubbled with an enthusiasm that was infectious. She recommended one of the house specialities, a Tomahawk steak (£60). We flirted with the idea of sharing 30 ounces of prime rib meat, until we saw one arrive at an adjacent table. It was like something out of The Flintstones. So much for being cavemen, there was no way we could even contemplate eating that much. We went for something smaller, an idea which didn’t dampen the enthusiasm of our waitress. It was clear that, although the portions were large (very large), this wasn’t a Man vs. Food challenge. The food was too good for that. Far too good. Relieved we weren’t expected to grunt and wear over-sized bibs, my neighbour and I discussed his plans for a new conservatory as we ate a Sharing Meat Platter (£11) and BBQ’d Chicken Wings