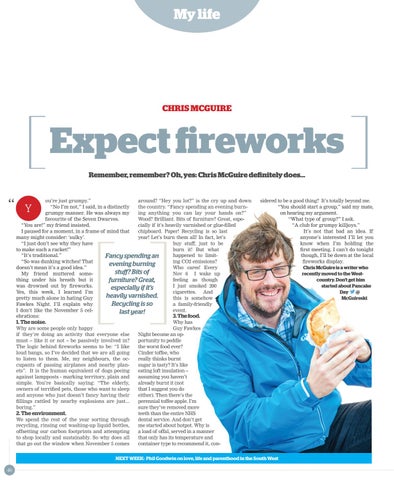 ou’re just grumpy.” around? “Hey you lot?” is the cry up and down “No I’m not,” I said, in a distinctly the country. “Fancy spending an evening burngrumpy manner. He was always my ing anything you can lay your hands on?” favourite of the Seven Dwarves. Wood? Brilliant. Bits of furniture? Great, espe“You are!” my friend insisted. cially if it’s heavily varnished or glue-filled I paused for a moment, in a frame of mind that chipboard. Paper! Recycling is so last many might consider: ‘sulky’. year! Let’s burn them all! In fact, let’s “I just don’t see why they have buy stuff, just to be to make such a racket!” burn it! But what “It’s traditional.” happened to limitFancy spending an “So was dunking witches! That ing CO2 emissions? evening burning doesn’t mean it’s a good idea.” Who cares! Every stuff? Bits of My friend muttered someNov 6 I wake up thing under his breath but it feeling as though furniture? Great, was drowned out by fireworks. I just smoked 200 especially if it’s Yes, this week, I learned I’m cigarettes. And heavily varnished. pretty much alone in hating Guy this is somehow Fawkes Night. I’ll explain why a family-friendly Recycling is so I don’t like the November 5 celevent. last year! 3. The food. ebrations: Why has 1. The noise. Guy Fawkes Why are some people only happy Night become an opif they’re doing an activity that everyone else portunity to peddle must – like it or not – be passively involved in? the worst food ever? The logic behind fireworks seems to be: “I like Cinder toffee, who loud bangs, so I’ve decided that we are all going really thinks burnt to listen to them. Me, my neighbours, the ocsugar is tasty? It’s like cupants of passing airplanes and nearby planeating loft insulation – ets”. It is the human equivalent of dogs peeing assuming you haven’t against lampposts - marking territory, plain and already burnt it (not simple. You’re basically saying: “The elderly, that I suggest you do owners of terrified pets, those who want to sleep either). Then there’s the and anyone who just doesn’t fancy having their perennial toffee apple. I’m fillings rattled by nearby explosions are just... sure they’ve removed more boring.” teeth than the entire NHS 2. The environment. dental service. And don’t get We spend the rest of the year sorting through me started about hotpot. Why is recycling, rinsing out washing-up liquid bottles, a load of offal, served in a manner offsetting our carbon footprints and attempting that only has its temperature and to shop locally and sustainably. So why does all container type to recommend it, conthat go out the window when November 5 comes

sidered to be a good thing? It’s totally beyond me. “You should start a group,” said my mate, on hearing my argument. “What type of group?” I ask. “A club for grumpy killjoys.” It’s not that bad an idea. If anyone’s interested I’ll let you know when I’m holding the first meeting. I can’t do tonight though, I’ll be down at the local fireworks display. Chris McGuire is a writer who recently moved to the Westcountry. Don’t get him started about Pancake Day @ McGuireski 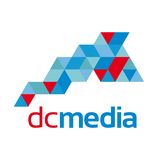