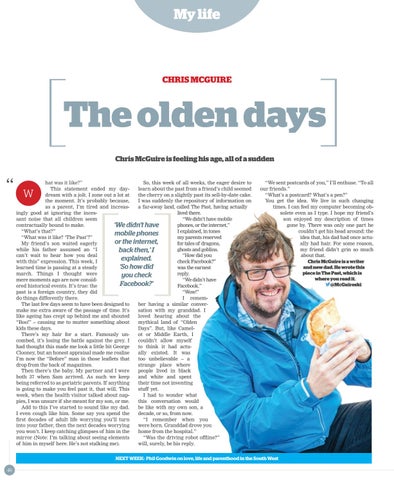 The olden days Chris Mcguire is feeling his age, all of a sudden

hat was it like?” So, this week of all weeks, the eager desire to This statement ended my daylearn about the past from a friend’s child seemed dream with a jolt. I zone out a lot at the cherry on a slightly past its sell-by-date cake. the moment. It’s probably because, I was suddenly the repository of information on as a parent, I’m tired and increasa far-away land, called The Past, having actually ingly good at ignoring the inceslived there. sant noise that all children seem “We didn’t have mobile contractually bound to make. phones, or the internet,” ‘We didn’t have “What’s that?” I explained, in tones mobile phones “What was it like? ‘The Past’?” my parents reserved or the internet, My friend’s son waited eagerly for tales of dragons, while his father assumed an “I ghosts and goblins. back then,’ I can’t wait to hear how you deal “How did you explained. with this” expression. This week, I check Facebook?” ‘So how did learned time is passing at a steady was the earnest march. Things I thought were reply. you check mere moments ago are now consid“We didn’t have Facebook?’ ered historical events. It’s true: the Facebook.” past is a foreign country, they did “Wow!” do things differently there. I rememThe last few days seem to have been designed to ber having a similar convermake me extra aware of the passage of time. It’s sation with my granddad. I like ageing has crept up behind me and shouted loved hearing about the “Boo!” – causing me to mutter something about mythical land of “Olden kids these days. Days”. But, like CamelThere’s my hair for a start. Famously unot or Middle Earth, I combed, it’s losing the battle against the grey. I couldn’t allow myself had thought this made me look a little bit George to think it had actuClooney, but an honest appraisal made me realise ally existed. It was I’m now the “Before” man in those leaflets that too unbelievable – a drop from the back of magazines. strange place where Then there’s the baby. My partner and I were people lived in black both 37 when Sam arrived. As such we keep and white and spent being referred to as geriatric parents. If anything their time not inventing is going to make you feel past it, that will. This stuff yet. week, when the health visitor talked about napI had to wonder what pies, I was unsure if she meant for my son, or me. this conversation would Add to this I’ve started to sound like my dad. be like with my own son, a I even cough like him. Some say you spend the decade, or so, from now. first decades of adult life worrying you’ll turn “I remember when you into your father, then the next decades worrying were born. Granddad drove you you won’t. I keep catching glimpses of him in the home from the hospital.” mirror (Note: I’m talking about seeing elements “Was the driving robot offline?” of him in myself here. He’s not stalking me). will, surely, be his reply.

“We sent postcards of you,” I’ll enthuse. “To all our friends.” “What’s a postcard? What’s a pen?” You get the idea. We live in such changing times. I can feel my computer becoming obsolete even as I type. I hope my friend’s son enjoyed my description of times gone by. There was only one part he couldn’t get his head around: the idea that, his dad had once actually had hair. For some reason, my friend didn’t grin so much about that. Chris Mcguire is a writer and new dad. he wrote this piece in The Past, which is where you read it. @Mcguireski

The lifestyle magazine inside the Western morning News on Saturday

The lifestyle magazine inside the Western morning News on Saturday