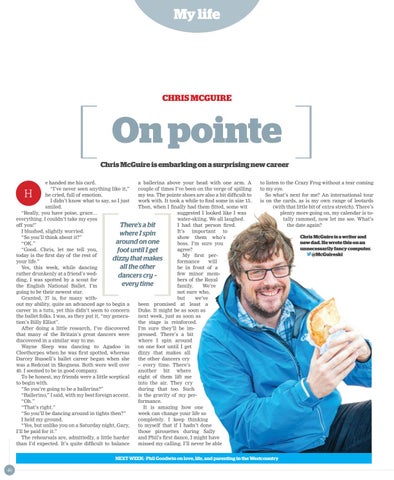 On pointe Chris McGuire is embarking on a surprising new career e handed me his card. a ballerina above your head with one arm. A “I’ve never seen anything like it,” couple of times I’ve been on the verge of spilling he cried, full of emotion. my tea. The pointe shoes are also a bit difficult to I didn’t know what to say, so I just work with. It took a while to find some in size 15. smiled. Then, when I finally had them fitted, some wit “Really, you have poise, grace… suggested I looked like I was everything. I couldn’t take my eyes water-skiing. We all laughed. off you!” I had that person fired. There’s a bit I blushed, slightly worried. It’s important to where I spin “So you’ll think about it?” show them who’s around on one “OK.” boss. I’m sure you “Good. Chris, let me tell you, agree? foot until I get today is the first day of the rest of My first perdizzy that makes your life.” formance will all the other Yes, this week, while dancing be in front of a rather drunkenly at a friend’s wedfew minor memdancers cry – ding, I was spotted by a scout for bers of the Royal every time the English National Ballet. I’m family. We’re going to be their newest star. not sure who, Granted, 37 is, for many withbut we’ve out my ability, quite an advanced age to begin a been promised at least a career in a tutu, yet this didn’t seem to concern Duke. It might be as soon as the ballet folks. I was, as they put it, “my generanext week, just as soon as tion’s Billy Elliot”. the stage is reinforced. After doing a little research, I’ve discovered I’m sure they’ll be imthat many of the Britain’s great dancers were pressed. There’s a bit discovered in a similar way to me. where I spin around Wayne Sleep was dancing to Agadoo in on one foot until I get Cleethorpes when he was first spotted, whereas dizzy that makes all Darcey Bussell’s ballet career began when she the other dancers cry was a Redcoat in Skegness. Both were well over – every time. There’s 40. I seemed to be in good company. another bit where To be honest, my friends were a little sceptical eight of them lift me to begin with. into the air. They cry “So you’re going to be a ballerina?” during that too. Such “Ballerino,” I said, with my best foreign accent. is the gravity of my per“Oh.” formance. “That’s right.” It is amazing how one “So you’ll be dancing around in tights then?” week can change your life so I held my ground. completely. I keep thinking “Yes, but unlike you on a Saturday night, Gary, to myself that if I hadn’t done I’ll be paid for it.” those pirouettes during Sally The rehearsals are, admittedly, a little harder and Phil’s first dance, I might have than I’d expected. It’s quite difficult to balance missed my calling. I’ll never be able

to listen to the Crazy Frog without a tear coming to my eye. So what’s next for me? An international tour is on the cards, as is my own range of leotards (with that little bit of extra stretch). There’s plenty more going on, my calendar is totally rammed, now let me see. What’s the date again? Chris McGuire is a writer and new dad. He wrote this on an unnecessarily fancy computer. @McGuireski

NEXT WEEK: Phil Goodwin on love, life, and parenting in the Westcountry 46