Blue Ocean Chronicles - a Trilogy - cycling for all 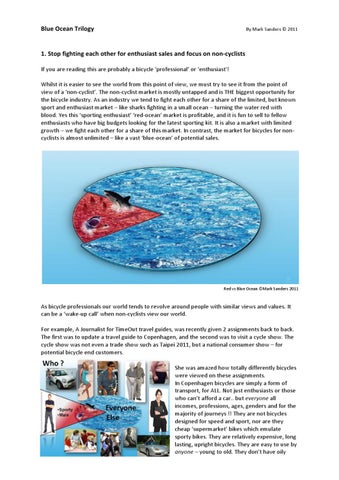 1. Stop fighting each other for enthusiast sales and focus on non-cyclists If you are reading this are probably a bicycle ‘professional’ or ‘enthusiast&#39;! Whilst it is easier to see the world from this point of view, we must try to see it from the point of view of a ‘non-cyclist’. The non-cyclist market is mostly untapped and is THE biggest opportunity for the bicycle industry. As an industry we tend to fight each other for a share of the limited, but known sport and enthusiast market – like sharks fighting in a small ocean – turning the water red with blood. Yes this ‘sporting enthusiast’ ‘red-ocean’ market is profitable, and it is fun to sell to fellow enthusiasts who have big budgets looking for the latest sporting kit. It is also a market with limited growth – we fight each other for a share of this market. In contrast, the market for bicycles for noncyclists is almost unlimited – like a vast ‘blue-ocean’ of potential sales.

As bicycle professionals our world tends to revolve around people with similar views and values. It can be a ‘wake-up call’ when non-cyclists view our world. For example, A Journalist for TimeOut travel guides, was recently given 2 assignments back to back. The first was to update a travel guide to Copenhagen, and the second was to visit a cycle show. The cycle show was not even a trade show such as Taipei 2011, but a national consumer show – for potential bicycle end customers. She was amazed how totally differently bicycles were viewed on these assignments. In Copenhagen bicycles are simply a form of transport, for ALL. Not just enthusiasts or those who can’t afford a car.. but everyone all incomes, professions, ages, genders and for the majority of journeys !! They are not bicycles designed for speed and sport, nor are they cheap ‘supermarket’ bikes which emulate sporty bikes. They are relatively expensive, long lasting, upright bicycles. They are easy to use by anyone – young to old. They don’t have oily

Blue Ocean Chronicles - a Trilogy - cycling for all 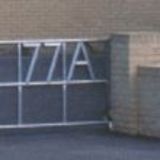