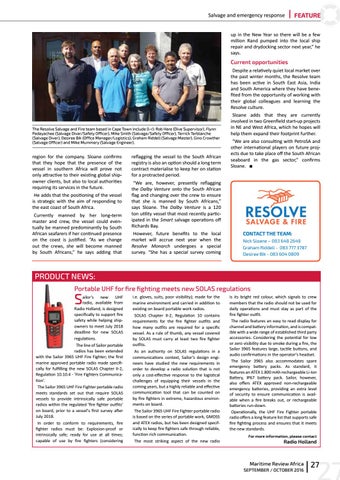 up in the New Year so there will be a few million Rand pumped into the local ship repair and drydocking sector next year,” he says.

Current opportunities Despite a relatively quiet local market over the past winter months, the Resolve team has been active in South East Asia, India and South America where they have benefited from the opportunity of working with their global colleagues and learning the Resolve culture.

region for the company. Sloane confirms that they hope that the presence of the vessel in southern Africa will prove not only attractive to their existing global shipowner clients, but also to local authorities requiring its services in the future. He adds that the positioning of the vessel is strategic with the aim of responding to the east coast of South Africa. Currently manned by her long-term master and crew, the vessel could eventually be manned predominantly by South African seafarers if her continued presence on the coast is justified. “As we change out the crews, she will become manned by South Africans,” he says adding that

reflagging the vessel to the South African registry is also an option should a long term contract materialise to keep her on station for a protracted period.

Sloane adds that they are currently involved in two Greenfield start-up projects in NE and West Africa, which he hopes will help them expand their footprint further. “We are also consulting with PetroSA and other international players on future projects due to take place off the South African seaboard in the gas sector,” confirms Sloane. 

“We are, however, presently reflagging the Dalby Venture onto the South African flag and changing over the crew to ensure that she is manned by South Africans,” says Sloane. The Dalby Venture is a 120 ton utility vessel that most recently participated in the Smart salvage operations off Richards Bay. However, future benefits to the local market will accrue next year when the Resolve Monarch undergoes a special survey. “She has a special survey coming

ailor’s new UHF radio, available from Radio Holland, is designed specifically to support fire safety while helping shipowners to meet July 2018 deadline for new SOLAS regulations. The line of Sailor portable radios has been extended with the Sailor 3965 UHF Fire Fighter; the first marine approved portable radio made specifically for fulfilling the new SOLAS Chapter II-2, Regulation 10.10.4 - 'Fire Fighters Communication'. The Sailor 3965 UHF Fire Fighter portable radio meets standards set out that require SOLAS vessels to provide intrinsically safe portable radios within the regulated 'fire fighter outfits' on board, prior to a vessel's first survey after July 2018. In order to conform to requirements, fire fighter radios must be: Explosion-proof or intrinsically safe; ready for use at all times; capable of use by fire fighters (considering

i.e. gloves, suits, poor visibility); made for the marine environment and carried in addition to existing on board portable work radios. SOLAS Chapter II-2, Regulation 10 contains requirements for the fire fighter outfits and how many outfits are required for a specific vessel. As a rule of thumb, any vessel covered by SOLAS must carry at least two fire fighter outfits. As an authority on SOLAS regulations in a communications context, Sailor’s design engineers have studied the new requirements in order to develop a radio solution that is not only a cost-effective response to the logistical challenges of equipping their vessels in the coming years, but a highly reliable and effective communication tool that can be counted on by fire fighters in extreme, hazardous environments on board. The Sailor 3965 UHF Fire Fighter portable radio is based on the series of portable work, GMDSS and ATEX radios, but has been designed specifically to keep fire fighters safe through reliable, function rich communication. The most striking aspect of the new radio

is its bright red colour, which signals to crew members that the radio should not be used for daily operations and must stay as part of the fire fighter outfit. The radio features an easy to read display for channel and battery information, and is compatible with a wide range of established third party accessories. Considering the potential for low or zero visibility due to smoke during a fire, the Sailor 3965 features large, tactile buttons, and audio confirmations in the operator's headset. The Sailor 3965 also accommodates spare emergency battery packs. As standard, it features an ATEX 1.800 mAh rechargeable Li-Ion Battery, IP67 battery pack. Sailor, however, also offers ATEX approved non-rechargeable emergency batteries, providing an extra level of security to ensure communication is available when a fire breaks out, or rechargeable batteries run-down. Operationally, the UHF Fire Fighter portable radio offers a long feature list that supports safe fire fighting process and ensures that it meets the new standards. For more information, please contact 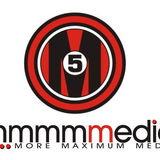 News of the maritime sectors in Southern Africa

News of the maritime sectors in Southern Africa