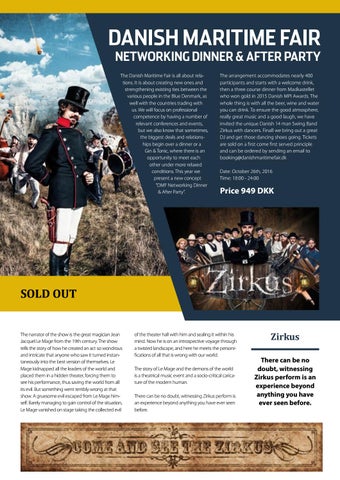 DANISH MARITIME FAIR NETWORKING DINNER & AFTER PARTY The Danish Maritime Fair is all about relations. It is about creating new ones and strengthening existing ties between the various people in the Blue Denmark, as well with the countries trading with us. We will focus on professional competence by having a number of relevant conferences and events, but we also know that sometimes, the biggest deals and relationships begin over a dinner or a Gin & Tonic, where there is an opportunity to meet each other under more relaxed conditions. This year we present a new concept â&#x20AC;&#x153;DMF Networking Dinner & After Partyâ&#x20AC;?.

The arrangement accommodates nearly 400 participants and starts with a welcome drink, then a three course dinner from Madkastellet who won gold in 2015 Danish MPI Awards. The whole thing is with all the beer, wine and water you can drink. To ensure the good atmosphere, really great music and a good laugh, we have invited the unique Danish 14 man Swing Band Zirkus with dancers. Finall we bring out a great DJ and get those dancing shoes going. Tickets are sold on a first come first served principle and can be ordered by sending an email to booking@danishmaritimefair.dk Date: October 26th, 2016 Time: 18:00 - 24:00

The narrator of the show is the great magician Jean Jacquel Le Mage from the 19th century. The show tells the story of how he created an act so wondrous and intricate that anyone who saw it turned instantaneously into the best version of themselves. Le Mage kidnapped all the leaders of the world and placed them in a hidden theater, forcing them to see his performance, thus saving the world from all its evil. But something went terribly wrong at that show. A gruesome evil escaped from Le Mage himself. Barely managing to gain control of the situation, Le Mage vanished on stage taking the collected evil

of the theater hall with him and sealing it within his mind. Now he is on an introspective voyage through a twisted landscape, and here he meets the personifications of all that is wrong with our world. The story of Le Mage and the demons of the world is a theatrical music event and a socio-critical caricature of the modern human. There can be no doubt, witnessing Zirkus perform is an experience beyond anything you have ever seen before.

Zirkus There can be no doubt, witnessing Zirkus perform is an experience beyond anything you have ever seen before. 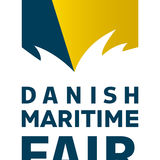