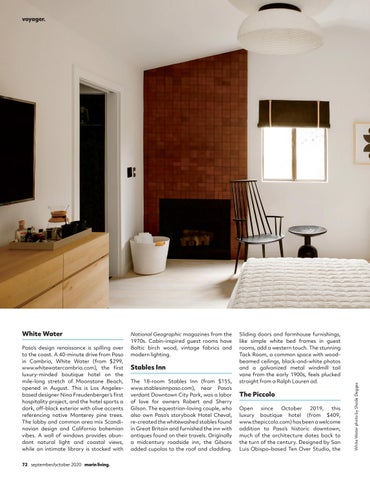 White Water Paso’s design renaissance is spilling over to the coast. A 40-minute drive from Paso in Cambria, White Water (from $299, www.whitewatercambria.com), the first luxury-minded boutique hotel on the mile-long stretch of Moonstone Beach, opened in August. This is Los Angeles– based designer Nina Freudenberger’s first hospitality project, and the hotel sports a dark, off-black exterior with olive accents referencing native Monterey pine trees. The lobby and common area mix Scandinavian design and California bohemian vibes. A wall of windows provides abundant natural light and coastal views, while an intimate library is stocked with 72 september/october 2020 marin living.

Stables Inn The 18-room Stables Inn (from $155, www.stablesinnpaso.com), near Paso’s verdant Downtown City Park, was a labor of love for owners Robert and Sherry Gilson. The equestrian-loving couple, who also own Paso’s storybook Hotel Cheval, re-created the whitewashed stables found in Great Britain and furnished the inn with antiques found on their travels. Originally a midcentury roadside inn, the Gilsons added cupolas to the roof and cladding.

The Piccolo Open since October 2019, this luxury boutique hotel (from $409, www.thepiccolo.com) has been a welcome addition to Paso’s historic downtown; much of the architecture dates back to the turn of the century. Designed by San Luis Obispo–based Ten Over Studio, the

Design and Domain. The second issue issue of marin living! We live in one of the most dynamic, beautiful and healthiest places in the country. Join us as we explore the vibrant experience that is marin living. 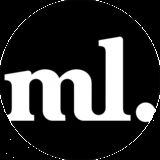