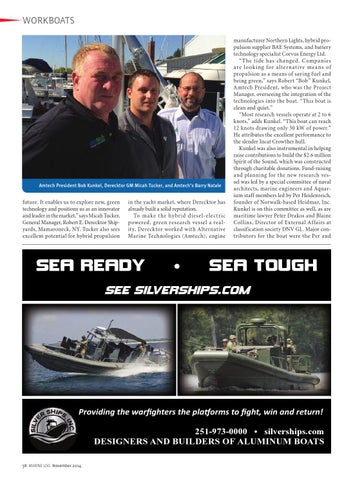 manufacturer Northern Lights, hybrid propulsion supplier BAE Systems, and battery technology specialist Corvus Energy Ltd. “T he t ide ha s cha nged. Compa nies a re look i ng for a lter nat ive me a n s of propulsion as a means of saying fuel and being green,” says Robert “Bob” Kunkel, Amtech President, who was the Project Manager, overseeing the integration of the technologies into the boat. “This boat is clean and quiet.” “Most research vessels operate at 2 to 6 knots,” adds Kunkel. “This boat can reach 12 knots drawing only 30 kW of power.” He attributes the excellent performance to the slender Incat Crowther hull. Kunkel was also instrumental in helping raise contributions to build the $2.6 million Spirit of the Sound, which was constructed through charitable donations. Fund-raising and planning for the new research vessel was led by a special committee of naval architects, marine engineers and Aquarium staff members led by Per Heidenreich, founder of Norwalk-based Heidmar, Inc. Kunkel is on this committee as well, as are maritime lawyer Peter Drakos and Blaine Collins, Director of External Affairs at classification society DNV GL. Major contributors for the boat were the Per and

Providing the warfighters the platforms to fight, win and return! 251-973-0000 • silverships.com DESIGNERS AND BUILDERS OF ALUMINUM BOATS 38 MARINE LOG November 2014